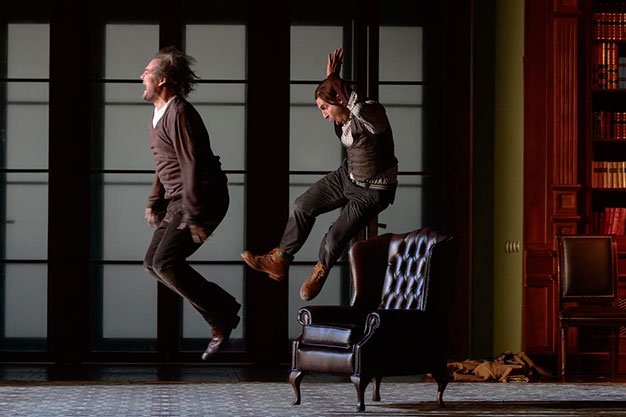 Rather than a charismatic womanizer whose sexy, seductive nature is apparent to all, this Don Juan is disheveled and troubled. Yet he attracts the operas three women like a Svengali, convincing them to fall for him. At times, in fact, it seems that they go against reason and convince themselves of his draw.

Tcherniakovs staging places the contemporary action among relatives in the house of the patriarchal Commendatore (Andrea Silvestrelli) killed by Giovanni at the start of the work, after hes seduced Donna Anna (Jane Archibald), the Commendatores daughter. Donna Elvira (Jennifer Holloway), another of the dons conquests, is here Giovannis wife and Annas cousin, while the third woman, the peasant Zerlina (Sasha Djihanian), becomes Annas daughter from a previous marriage.

The directors concept, including having weeks or months pass between one scene and the next, sets up some fascinating episodes, but others are nonsensical in terms of text and action. You might consider not reading the surtitles but just watching the relationships unfold onstage.

Take the scene where Elvira first appears. In the traditional staging, her identity is hidden from the lecherous Giovanni and his servant, Leporello (Kyle Ketelsen), and theres a comic moment when he realizes that his upcoming lay has already been seduced and abandoned. In Tcherniakovs surprising take, Giovanni and Elvira have a face-to-face dialogue, the seduction happening on a different level and as a kind of in-joke between them. It works beautifully, commenting on how Elvira knows her husband fools around with other women and at some level accepts his actions.

But at other times the words sung dont always match the narrative or characters bizarre behaviour. Anna knows from the start who seduces her, so her later realization that its Giovanni, a shocking moment she shares with her fiance, Don Ottavio (Michael Schade), has no weight.

Things arent as confusing in the second half, which has a believable emotional flow. The director allows for lots of pauses, time for us to take in what we see and hear and for the characters to realize things as well.

Too bad the opening performance took a while to settle down musically. Conductor Michael Hofstetter occasionally allowed his orchestra to drown out the singers, who were at times uncertain in their first numbers. His tempi could also have had more bite throughout.

Still, theres some fine work onstage, notably from Holloway, whose interaction with Braun and Ketelsen at the start of act two is riveting: the self-deluded Elvira convinces herself that Leporello is the don before she run off with the servant. Usually, the staging takes place on a dark night, with a cloak and hat concealing Leporellos identity. Don Giovannis aria that follows, in which he woos Elviras maid, here is a hypnotic, drunken reverie.

Archibalds strong voice gives force to Anna, while Djihanians Zerlina singing an aria to Giovannis coat reveals her obsession with him rather than with her fiance, Masetto (Zachary Nelson).

The productions best-defined relationship, though, is that between Giovanni and Leporello. Ketelsen has a fine voice and is also a fine clown, and the camaraderie between his gum-chewing, yo-yo-playing Leporello and Brauns mercurial outsider in this family setting is alternately playful, fierce and flippant.

Its Giovanni, though, who brings Tcherniakovs idea to life. Braun adds to his many fine performances this complex portrait of an addict who cant help but attract women even when it gives him little pleasure. Shifting from introspective melancholy to forced, manic outbursts of joy, humour and conviviality, his arch-seducer is a desperate, weary, angst-ridden man whos searching for something, and its not necessarily bedding every woman he meets.