SEUSSICAL by Stephen Flaherty and Lynn Ahrens, based on the works of Dr. Seuss (Young Peoples Theatre, 165 Front East).. 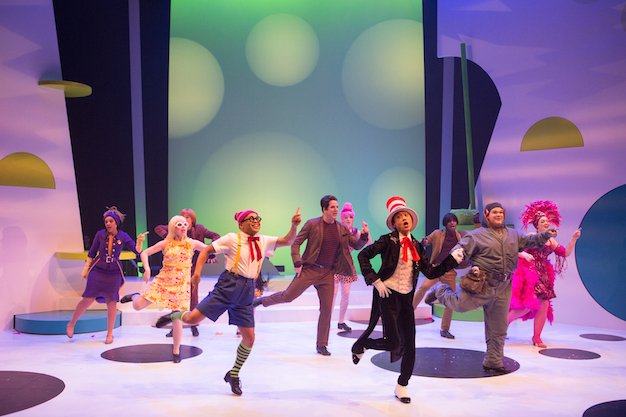 You can count on Young Peoples Theatre to put on a holiday show thats entertaining and fun for the entire family.

This year its Lynn Ahrens and Stephen Flahertys Seussical, a musical based on the curious creatures and inventive rhymes of Dr. Seuss. It draws on a number of Seuss kids books, including Horton Hears A Who, McElligots Pool, Horton Hatches An Egg and The Cat In The Hat.

That eponymous Cat (Jonathan Tan) is the shows narrator and initiator of the action. He introduces us to young Jojo (Jeigh Madjus), a resident of the tiny world of Whoville and, in the shows first song, The Thinks You Can Think, teaches Jojo that our imaginations open the door to a universe without limit.

Central to the action is Horton (Jacob MacInnis), an elephant who hears sounds from the speck of dust that is Whoville and is determined to safeguard it, despite being ridiculed by those around him, who doubt Whovilles existence. His kindness also involves Horton with Mayzie (Erin Breen), a bird determined to take a vacation despite having to hatch her newly laid egg she cons the pachyderm into egg-sitting.

Director Thom Allisons production, full of energy and jokes for adults and kids, is a winner from the start, with engaging choreography by Kimberley Rampersad and musical direction by Jeannie Wyse. The tunes range from up-tempo Latin tunes, lullabies and ballads to vaudeville numbers, torch songs and disco beats.

There are lessons along the way, too, about individuality and commitment a persons a person, no matter how small and I meant what I said and I said what I meant, an elephants faithful one hundred per cent but they never overpower the productions entertainment. This is a show that stands up for outsiders of all sizes and sorts.

The cast is a strong one, with fine work by Arinea Hermans as Gertrude, a shy, one-tail-feathered bird with a crush on Horton, Grace McRae as the initially nasty Sour Kangaroo, a marsupial with a baby and a great set of pipes, and Tans Cat, who also appears as a number of secondary figures. Also contributing to the exuberance are a pair of birds (Erica Peck and Claire Rouleau) and a trio of mischievous monkeys (Jahlen Barnes, Mike Jackson and Robert Markus).

Theres lots to enjoy visually, too, with Judith Bowdens polka-dot set, bright costumes by Charlotte Dean and lighting by Jason Hand. A special treat: the bubbles and fish that fill McElligots Pool.

If the production has a problem, its a loss of focus partway through the second half of what was initially a two-act show (here its 80 minutes, straight through). You know theres trouble when a restless young audience starts talking.

But theyre eventually caught up again by the action, which concludes with a final vibrant dance number that draws on yet another Dr. Seuss book.