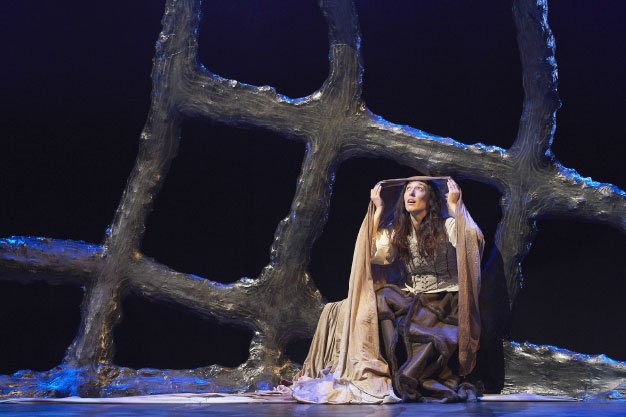 History books are lined with the names and narratives of the men who first colonized Canada, but the lesser-known Marguerite de Roberval rarely appears. Novelist Douglas Glover pulled her from the annals of history with a fictionalized account of her life in his Governor General’s Award-winning novel Elle, which Severn Thompson has adapted for the stage with luminous results.

In 1542, Elle (Thompson) is a young, aristocratic woman born in France who challenges societal norms with her feisty curiosity and appetite for books and sex. Her father, frustrated with the headstrong girl, packs her and a nursemaid off to the New World under her uncle’s care. A lusty shipboard affair with a tennis player enrages Elle’s guardian, who maroons them on the Isle of Demons, near Labrador. Aside from a few brief scenes with an Inuk lover named Itslk (Jonathan Fisher), the survival story unfolds through a detailed and dynamic monologue.

Thompson carries the bulk of the play alone on a nearly empty set yet creates a highly vivid world. Her storytelling animates each scene as Elle interacts with various characters, animals and the harsh environment. Even when the line between Elle’s fantasy and reality blurs, Thompson remains grounded.

The script starts strong but falters somewhat with the introduction of Itslk around the halfway mark. Although his entrance serves as an important transition point, and the representation of a First Nation person is integral to the play, Fisher delivers a meandering monologue. Still, there is much beauty in Thompson’s sensuous imagery throughout: a poetic description of the island’s smell, the feel of a bear’s fur or the taste of animal flesh.

Director Christine Brubaker neatly pulls all these elements together into a well-paced, often humorous and highly physical show, and Jennifer Goodman‘s production design enables Thompson to make fantastical images onstage using a pulley and a piece of flowing fabric.

The action is anchored by a branch-like set structure upstage. It looks menacing – like a boney hand reaching out – and conjures the fearsome, barren landscape.

Note: Passe Muraille is committed to reducing audience barriers by presenting some specially adapted stagings of Elle. The theatre’s inclusivity should be lauded. Please see website for more details.