FAULTY TOWERS: THE DINING EXPERIENCE (Starvox Entertainment). At the Sony Centre for the Performing Arts (1 Front East). Runs to. 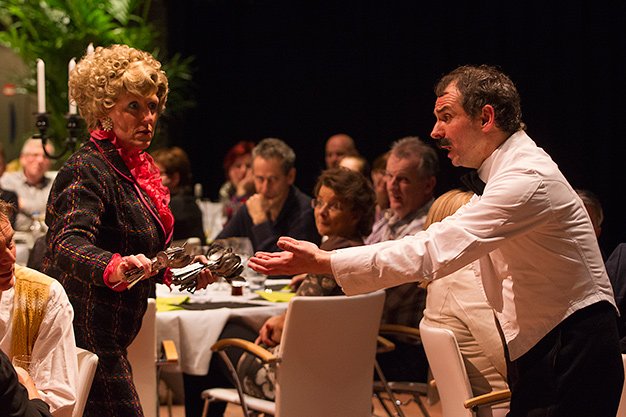 If youre hungry for some British farce and love the John Cleese TV series Fawlty Towers, rent the box set.

The current Starvox Entertainment-produced show, Faulty Towers: The Dining Experience the typo in the title is intentional serves up a thin imitation. Faulty, indeed.

Unlike other improvised dinner theatre shows Yo, Tony and Tina, where are youse, now? theres not much of an arc. That becomes obvious in the aimless pre-show, when put-upon ectomorphic hotel owner Basil (a fine Benedict Holme) and his shrill wife, Sybil (Alison Pollard-Mansergh, who is replaced by Imogen Miller Porter later in the run) merely argue bitterly, with immigrant Spanish waiter Manuel (Leigh Kelly) spouting malapropisms. Any opportunity to plant a couple of plot ideas here is wasted.

After awkwardly ushering us into a part of the Sony Centre basement that resembles less a hotel than a warehouse (complete with atmospheric ceiling ducts), the experience itself begins. Sort of.

There are a few gags. Manuel fumbles with the dinner rolls. The (unseen) drunk cook does something disgusting with the soup. (Speaking of which: waiters, Id appreciate your not touching the rims of all our soup bowls, thanks.) And Basil tries to conceal a scheme involving horse racing from Sybil.

The jokes about Manuels mangled English grow stale. Immigrant humour hasnt aged very well, ya know? And you can only hear Sybil shriek Basil! so many times before you want to stab a dessert fork in your eye.

While the performers comfortably interact with patrons many of whom simply want selfies theyre given little opportunity to shine.

The food, which takes forever to come out, is as limp as the comedy, although there were some choice insults directed at vegetarians and vegans.

This show has been performed since 1997 and has played the West End and the Edinburgh Fringe to sold-out audiences.

Theres no accounting for taste.