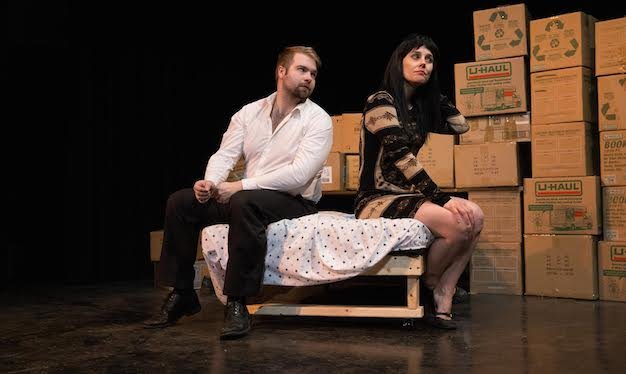 At the start of Scott Sharplins comedy First Time Last Time, Ben (Wesley J. Colford) and Airlea (Jenna Lahey) meet in a bar. They soon discover that they have next to nothing in common except a yen for each other.

Even when both swear they have no interest in commitment or a relationship, we know thats not going to be the trajectory of their connection.

Writer/director Sharplin uses some meta-theatre devices to move the narrative along, with the pair regularly breaking the fourth wall and suggesting whats coming later in their stories, both singly and together. Hes staged the action in front of a series of boxes that hold some theatrical surprises, most of which are revealed later in the play.

Ben is prosaic, a small-town guy who likes sports, plans a career in science and has family issues. Airleas inventive, with a touch of Goth and into live action role-playing, astrology and wigs.

Theres a pleasant chemistry between the actors, though the first act feels padded Sharplin provides information about this non-relationship relationship too slowly.

The script picks up in the second half, with a drive and tension the first lacks. After some meandering about what they want and need, Airlea and Ben reveal secrets theyve been keeping from each other, twist the truth and become more involved with each other. Ironically, what they share is what can cause their relationship to break apart.

Individual moments stand out in this half, among them a comic scene at an adoption agency, where nerves and desperation propel the action, and a series of variations on what it means to have left the map.

While the writing could use some editing, Lahey and Colford hold our attention as they build a connection that uses an unusual blend of painted stars, Wicca, babies and Cole Porter music.