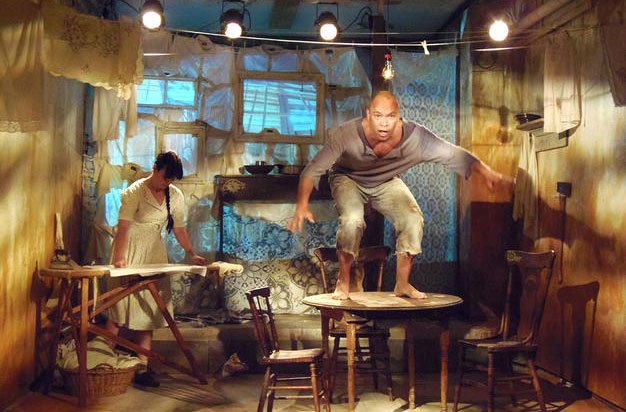 A Kensington Market basement only accessible through a long alleyway is a fitting space for this visually stunning double bill of one-acts from Off-Off-Broadway feminist innovator Maria Irene Fornes. Written in different styles from her storied career, the two plays, The Successful Life Of 3 (1965) and Mud (1983), also resonate with the history and politics of Kensington’s current struggle with creeping gentrification.

Mud, the longer and stronger of the pieces, has the same cast set up in a second room. Gone are the reflective walls and bright lights. Instead, we’re treated to another beautiful, immersive design, this time a ramshackle house in rural Alabama and intriguing background projections on a screen made of old dress shirts. Here, Mae (Latimer), a poor woman learning to read, tires of supporting her sick and uneducated partner, Lloyd (Robinson), and invites the older, literate Henry (Lineham) to live with them.

Mud’s complex characters explore some of the themes from the previous work: odd domestic arrangements, sexual power struggles, the desire for social mobility. But this play has much more emotional heft and comes to a chilling conclusion. The cast, especially Lineham, give superb performances that are tough to shake afterwards.

If you’re a newcomer to Fornes’s work, this production serves as a wonderful introduction to her stylistic range and ethos. If you’re a fan, it’s a thoughtful snapshot and celebration of her career.