>>> Review: God and the Indian 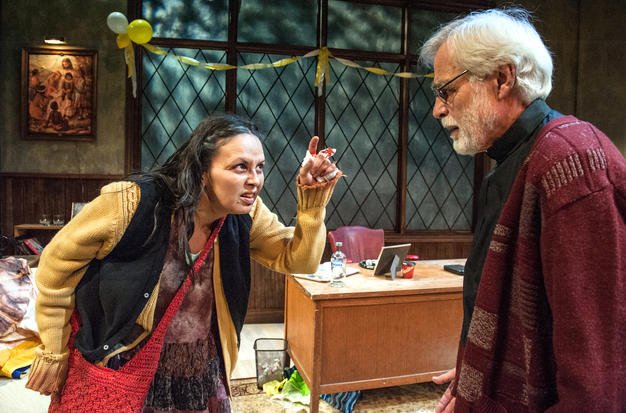 Lisa C. Ravensbergen and and Thomas Hauff square off in fiery two-hander.

In this fiery and poignant two-hander about the horrific mistreatment of native children in Canada’s residential school system, a former student who now goes by the name Johnny (Lisa C. Ravensbergen) confronts her abuser, an Anglican minister named George (Thomas Hauff). Homeless and desperate, Johnny spots George on the street, follows him to his church office and attempts to make him acknowledge their shared past and confess his crimes.

This emotional, engaging 90-minute battle of wits recounts many of the injustices endured by children in the system, who are separated from their families, stripped of their language and cultural identity, force-fed Christian ideology that casts them as “other” and subjected to physical and sexual violence.

George’s evolving excuses are telling: righteous indignation and flat-out denial give way to limited acknowledgement that he had been her teacher and that crimes were committed at the school – but only by others.

Under increasing pressure, George admits he contributed to the failing system, knew about abuses and did nothing to stop them, though he was only following orders.

However, George stops short of what Johnny really wants, an admission that he abused her. His attempts to gaslight her into doubting her own memory only further inflames the situation.

Director Renae Morriseau makes good use of the realistic office set, finding intriguing ways to believably keep the action in the room when a door and telephone are close at hand. Particularly haunting is the use of the set’s opaque back window, which in key moments becomes transparent, revealing Johnny’s old bedroom. Less effective are intermittent sounds suggesting some aspects of school life, which come out of nowhere and could be better integrated into the show.

Both Ravensbergen and Hauff give strong performances, taking the volleys of accusations and denials to heart-rending extremes. The show is an important reminder that the wide-spread damage caused by the schools cannot be undone, but it can be addressed and worked through.