HAMLET by William Shakespeare (Driftwood). At Withrow Park (south of Danforth, near the intersection of Fenwick and McConnell). To Sunday. 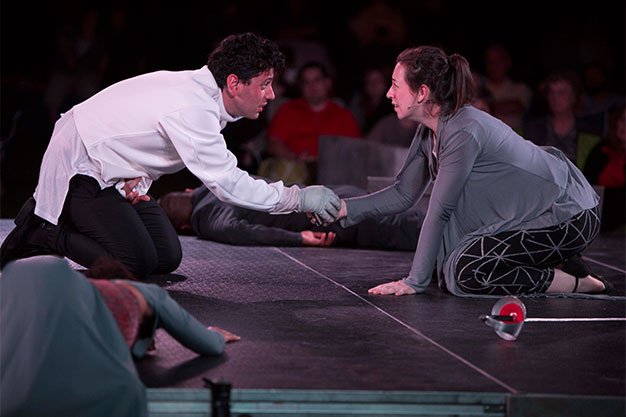 HAMLET by William Shakespeare (Driftwood). At Withrow Park (south of Danforth, near the intersection of Fenwick and McConnell). To Sunday (July 26) at 7:30 pm and then continuing its Ontario tour through August 16 see schedule at driftwoodtheatre.com. Pwyc, $20 sugg. 416-703-2773, ext 246. Rating: NNN

Even if youve seen Hamlet many times, the Driftwood Theatre production will still surprise you.

Adapted by Toby Malone, who draws on both the first (and so-called bad) quarto and the later folio version of the play, the show is a fast-moving two hours.

Why bad? Its appreciably shorter than the more usually performed text, even when the latters been cut. Turning the Danish prince into a doer more than a philosopher, the quarto has theatrically quick pacing and a sense of exhilaration on its side. It also, though, loses some of the poetry and refinement of language were used to, and Malone has taken some of the folios more familiar line readings and superimposed them onto the quartos narrative.

Youll hear some unfamiliar lines and see some reorganized scenes, which makes the audience listen to the story in a new way.

The idea is a good one for an outdoor production especially when mosquitoes dive-bomb the audience but sometimes scenes are so swift that we lose the words being spoken, poetic or not. Happily thats only in the first part of director D. Jeremy Smiths staging, which has Denmark in a state of siege. His set is made up of metal plates and girders, barbed wire and a bare bed (also with barbed wire), the last put to many uses.

Theres lots of doubling and tripling in the company of eight, with good work by Christopher Darroch and Steven Burley as a Rosencrantz and Guildenstern duo who are indeed dudes, complete with sunglasses.

Jon de Leons Claudius starts off as a jocular figure but stress makes him a nasty drinker de Leon also plays his brothers ghost, with a tortured mask-like head on top of the actors own. Nehassaiu deGanness Gertrude is a lusty woman who realizes before the plays end that her second husband has some baleful secrets.

Richard Alan Campbells Polonius has his secrets, too, as well as a dark side. Despite his bombast and comic playing with language, this councilor knows exactly what hes doing, speaking as much with his hands as his words. Natasha Mumba could use more emotional range as Ophelia its hard to see what drives her feelings for Hamlet or her family.

In the title role, Paolo Santalucia handles the text clearly and shows us the pain and anger beneath the mask he sometimes wears at court. His committed presentation is simple and conversational, and some of his best work is with Campbell as they bandy words with each other.

But the evenings strongest scenes are between Hamlet and the rational, scholarly Horatio, here played by Sarah Finn. That relationship develops a very different and subtle chemistry with a woman as Horatio. Her concern for the clearly troubled prince has, suggestively, more than comradeship at its base, and at times she seems almost embarrassed by the attention Hamlet gives her.

At the plays end, with Hamlets death, Horatio presented by the prince with the task of telling the Danes tale to the world is possibly losing more than a dear friend.