Review: How Do I Love Thee?

HOW DO I LOVE THEE? by Florence Gibson MacDonald (Canadian Rep Theatre). At the Berkeley Street Theatre Upstairs (26 Berkeley).. 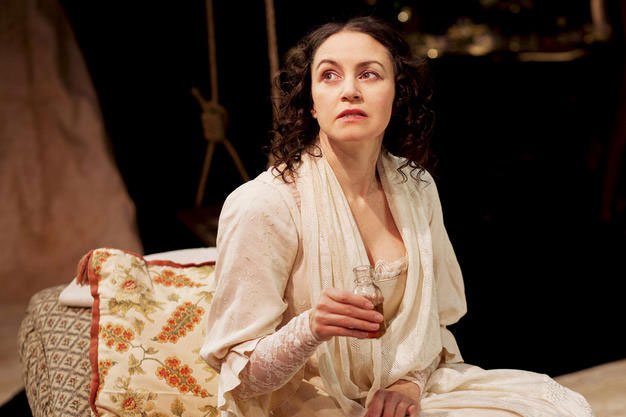 It’s Valentine’s Day week, and how fitting to see a play that sheds light on one of the most famous literary romances ever.

Florence Gibson MacDonald‘s How Do I Love Thee? rips the filigreed facade off the relationship between poets Elizabeth Barrett and Robert Browning, revealing not genteel declarations of tender love but passionate, drug-induced exclamations filled with lust, jealousy and obsession.

You get the sense that things are about to be overturned from the opening scene in Ken Gass‘s handsome production, where Barrett (Irene Poole) is propelling herself on a swing, her head down, trying to see the world upside-down. It’s an appropriate image, for her moods swing rapidly between boredom, depression, exaltation and irritation.

Through her cousin John Kenyon (David Schurmann), Barrett’s introduced to Browning (Matthew Edison), with whom she carries on a correspondence. A recluse, she doesn’t want to meet in person. (Imagine contemporary social media.) When they do finally meet, they hit it off, Browning gradually convincing her to get outdoors and eventually to move with him to Italy, where they’ll be free of the conventions of stuffy England.

What he doesn’t realize, however, is that Barrett, enabled by her housekeeper, Wilson (Nora McLellan, sadly not given much to do), is addicted to laudanum, morphine and ether. And Barrett has a very ambivalent relationship with her stern father.

Gass directs the early scenes with lively fluidity. Shawn Kerwin‘s airy set, with several vanity mirrors set up for each character in the background, lets people and scenes bleed into each other effectively. There’s a lovely sequence involving letters that’s too entertaining to spoil here.

Gibson has great fun with her central characters, giving them poetic lines that feel real and not contrived. And there are rich themes concerning art and love. Once the addiction emerges, however, the play becomes a bit repetitive, and the predictable A Star Is Born dynamic (famous person’s career goes down while unknown’s soars) kicks in.

But the two leads have a helluva time. You can see Edison’s Browning become challenged, captivated and then frustrated by Barrett. As for Poole, she seizes this great role with gusto, letting us feel the hunger and ravenous appetite for life in this conflicted woman. Her Barrett is full of complex contradictions, and Poole makes you believe them all, not the least in her angry, pained reading of the title poem.