Review: How To Kill A Comedian

HOW TO KILL A COMEDIAN written and performed by Ashley Botting, Leigh Cameron, Kyle Dooley, Etan Muskat, Kirsten Rasmussen and. 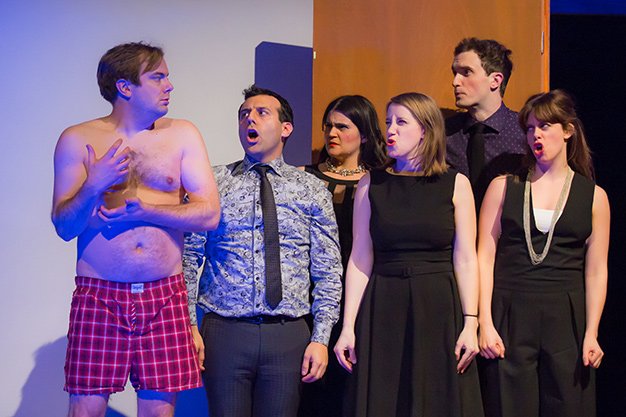 Kevin Whalen (left) gets to display his range in new Second City show How To Kill A Comedian.

Kevin Whalen (left) gets to display his range in new Second City show How To Kill A Comedian.

When I heard the Second City was revamping its mainstage cast something that happens every few years I was intrigued. Change is always good, but perfecting jokes can be a tricky business.

Ive admired the companys three new cast members in other incarnations for years, but they havent yet found their sweet spots here. How To Kill A Comedian falls somewhere between the hilarious Sixteen Scandals and the disappointing Rebel Without A Cosmos. Consider this a transition show.

Under director Kerry Griffin, the company has produced a couple of gems. One sketch destined for classic status uses the current board game trend to look at social inequity. In a game called Privilege, a white male player (Kyle Dooley) easily scores more points than a woman (Kirsten Rasmussen) and a brown man (Etan Muskat), who keep running into roadblocks. From setup to, er, blackout line, its perfection.

Another winner concerns a mock news item in which an obnoxious reporter (Ashley Botting) interviews two scientists (Leigh Cameron and Muskat) and only asks sexist questions of the man. So relevant, especially in the wake of awards season red carpets.

The act one closer about the progressive new Pope (Kevin Whalen) is one of the bravest takes on organized religion Ive seen SC deliver, combining biting social satire and Did they just say that? jaw-droppers with of all things a funky Shaft score by musical director Matthew Reid.

Two fun sketches feature improv. Botting, whos the unofficial star of this show, shines as a chanteuse who meets an ex in the audience and must cleverly integrate his info into her song, while a scenario involving cops and an undercover agent is amusing and well-staged.

For every sketch that detonates theres one that fizzles, including a scene where men express their feelings via bad Ahnold impressions, an apathetic female rap duet that to mimic the hashtag they use dont make us give a damn, and a flu shot PSA that has more energy than laughs.

Whalen gets to display his full range, especially in an extended sequence in which he protests bad news by doffing his clothes, accompanied by a jaunty, catchy march.

But I expect great things in the future from newcomers Cameron, Rasmussen and Dooley. Theyre all first-rate improvisers, so I look forwarding to dropping in on free post-show improv sets to see them let loose.