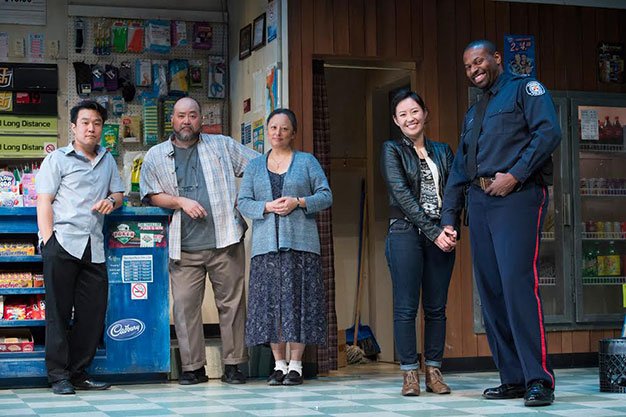 Kims Convenience is, in theatrical terms, far more than a handy, unremarkable corner milk store. Since its premiere, Ins Chois play has become a Canadian classic that has touched and entertained audiences across the country.

The Soulpepper production is back for another run, and even if youve seen it before, this version is worth a visit.

The piece is set in a Regent Park store run by the indomitable Mr. Kim, or Appa, (Dad), as his children call him. The store is his life and he refuses to sell, not even for a fine offer from a real estate agent who impresses on Appa the gentrification and likely Walmartization of the neighbourhood.

What Appa wants to do is pass the store on to his children, but son Jung left home years ago after a fight with his father and daughter Janet wants her own career as a photographer. Appas wife, Umma (Mom), does her best to mediate the familys prickly inter-generational fights.

The cast, a blend of old and new performers working with remount director Albert Schultz (Weyni Mengesha helmed the original), captures this family tales wonderful blend of comedy and heart. Ken MacKenzies detailed recreation of a corner shop is so real youll be tempted to step into the action to buy something.

Jane Luk convinces us of Ummas quiet strength and long-suffering fortitude, while Dale Yim is also believable as the troubled son looking for a way to reverse his impulsive, youthful actions.

Calgary actor Chantelle Han is spot on as the rebellious Janet, who loves her family but not enough to allow her parents to define her life. The tenacity and steeliness with which she stands up to Appa makes it clear that shes very much her fathers daughter. Even so, theres a lovely emotional moment when she realizes the debt, financial and otherwise, she owes her stubborn parent and the way her demands have hurt him.

Returning actor Andre Sills still finds all the humour and charm in his several characters, including the real estate agent, a possible shoplifter and Jungs school friend whos clearly drawn to Janet.

Paul Sun-Hyung Lee inhabits Appa totally, as he has since the shows premiere in the 2011 Fringe I cant imagine seeing anyone else play the role. Proud, determined, sure that hes always right, as stubbornly defensive of his Korean heritage as he is critical of anything Japanese, Lees Appa is broadly humorous and emotionally true. Watch him in the shows final scene, where his pride takes a very different form and we see a warmth thats been buried in this former teacher from Korea whos had to reinvent himself in Canada.

Change a few of this characters cultural specifics and he could be from any ethnic community. Whats remarkable about Lees performance is that he is, at the same time, clearly a member of a particular society and also a universal figure.

Im glad to see that the program acknowledges the plays beginnings in fu-GEN Asian Canadian Theatre Company, where then-artistic director Nina Lee Aquino encouraged Choi to develop the story into a full-length play.