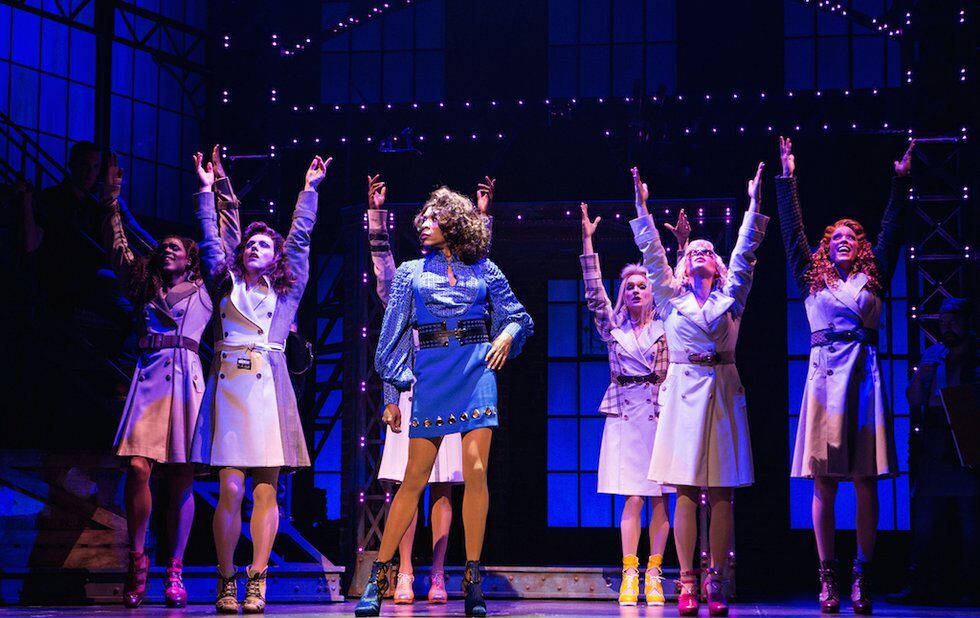 Midway through the second act of the outrageously entertaining musical Kinky Boots, the character Lola pronounces: I have come for one thing only adulation! She gets it, and so does this big, flashy yet heartfelt show that opened, appropriately enough, on the night of Torontos Pride parade.

Based on the 2005 film starring a then unknown Chiwetel Ejiofor, the musical tells the story of the unlikely friendship between two Brits. Charlie (Graham Scott Fleming) is the directionless son of a shoe magnate in the Midlands, while Lola (Alan Mingo Jr.) is a drag queen whos lighting up London. When Charlie inherits his fathers faltering business, a chance encounter with Lola complete with broken high heel leads to the idea of using the shoe factory to manufacture boots for cross-dressers. (Turns out Lolas a bit of a designer, too.)

It takes a while for the musical with a book by Harvey Fierstein and music and lyrics by pop diva Cyndi Lauper to find its feet. Theres a lot of backstory about the factory, the changing economic times and Charlies engagement to the social climbing Nicola (Vanessa Sears). But once Lola and the Angels, her fabulous backup dancer/singers, appear, the show literally kicks into high gear.

As Lola, Mingo Jr. is a mixture of Donna Summer and Faye Dunaways Mommie Dearest, his face twitching with melodramatic tics, aware of everything going on around him. You havent properly heard the words burgundy or red until Mingo Jr. contrasts them. Whats even more remarkable is that he gets to show an entirely different side in the first act, lending soul to what couldve been just a glossy impression. A star is born.

Hes surrounded by some great supporting players, though, including Over The Rainbow finalist AJ Bridel, whose quirky assistant Lauren literally stops the show with a number about her bad dating history (there are touches of Laupers monster hit Girls Just Wanna Have Fun here) and Don, the bigoted foreman played with gruff authenticity by former Soulpepper ensemble member Daniel Williston.

The second act isnt as compelling, possibly because the characters have all been established and a lot of time is spent on a subplot that adds little to the general narrative. The musical numbers arent as catchy or as emotionally resonant as in the first act either, even though Fleming and Mingo Jr. sing the hell out of them.

But even here there are brilliant grace notes, including Lisa Horners control freak Milanese stage manager and, during the finale, the appearance of four characters who give heart and soul to whats essentially a flashy spectacle.

Laupers songs arent especially catchy you wont be humming any tunes leaving the theatre but the lyrics are sincere. Long before it was fashionable, she championed queer rights and encouraged people to show their true colours.