NOW MagazineCultureDance>>> Review: Marienbads Tannahill and House push their bodies to the limit

>>> Review: Marienbads Tannahill and House push their bodies to the limit 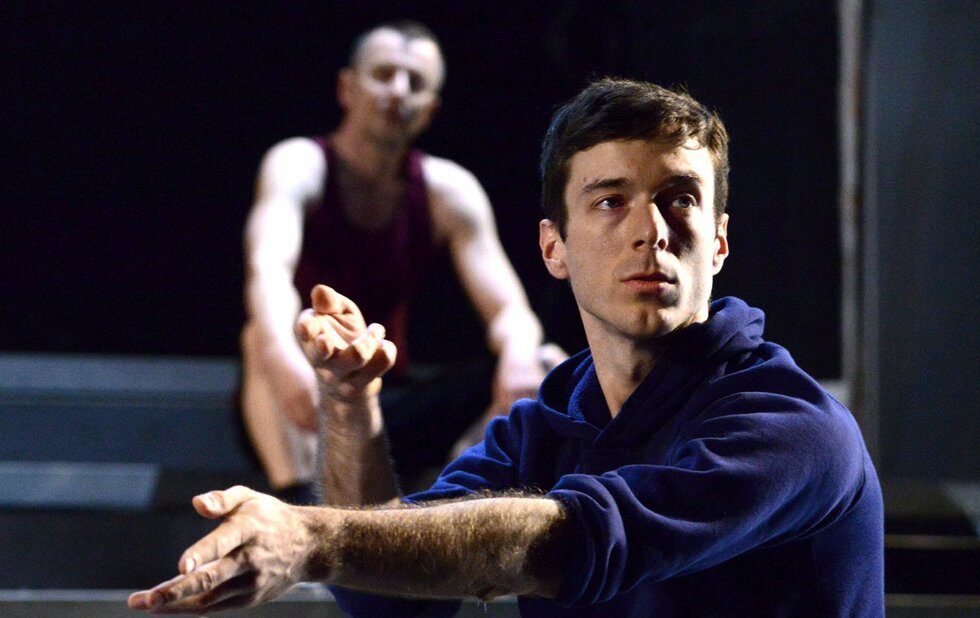 Jordan Tannahill (front) and Christopher House push their bodies to the limit in Marienbad.

Christopher House and Jordan Tannahill‘s new duet is a strange and delicate expression of connection. Fraught with mysterious undercurrents and motivations, the 50-minute work juxtaposes antic movement with moments of tense repose.

The orientation of the Winchester Street space is cleverly flipped, with the audience seated in the usual performance area and the performers running rampant on the risers that usually support the seats. In notes, House calls this “a found environment of floating terraces.” Aurally, it creaks and booms like a ship at sea or an old house.

Matt Smith‘s thrilling score helps the dancers work this hard-edged space. Its mix of machine noise, choral music and natural sounds – murmuring voices, birds singing, dogs barking – swells and subsides in volume and intensity. It knows when to be silent, during time-out moments between kinetic outbursts, for example, or when Tannahill starts manically leaping, making the risers themselves jump percussively.

Tannahill’s movement style is generally more exuberant than House’s controlled and detailed dancing. But the intergenerational aspects of the work – Tannahill is probably 30 years younger than House – aren’t as obvious as you might expect. Mostly they’re in the mindset of the viewer trying to decode the relationship along conventional lines: “What are these guys to each other?”

Ageists will note that House has emphatically still got it, and in one sequence he blatantly shows it off, shifting in and out of dancerly and mildly comic poses in an effort to amuse and/or impress a watching Tannahill.

Both push their bodies hard – walking, running and tumbling up and down the risers. They dangle by their fingers from an architectural detail closer to the ceiling than the floor. At one point Tannahill drags House’s dead weight limb by limb up the risers.

I’m sure it’s strategic and well rehearsed, but the more gymnastic elements feel risky. Caught up in the pair’s situation, we watch them mutter and gesture, and they watch each other with what seems like approval or, on occasion, wariness. Of the many details, some are charming, some weird, but the otherworldly duet is grounded by these intricacies.

They are the unpredictable yet very real stuff of human business.