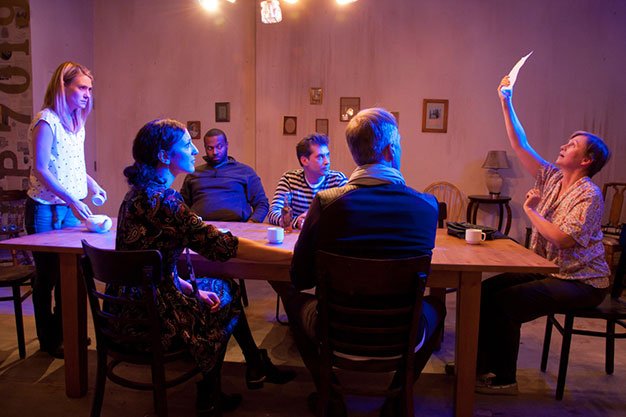 How good is ARCs site-specific production of Irish playwright Deirdre Kinahans Moment? When, during the gripping climax to the first act, an actor barfed in character and some landed on my shoes and pants, I barely blinked. Sure, the actor, Deborah Drakeford, could improve her projectile vomit aim. But it was dramatically appropriate. And I doubt it was payback for a bad review. As always, shes riveting.

Drakeford plays Teresa Lynch, the highly strung Dublin matriarch of a family thats still recovering from a tragedy that occurred more than a decade earlier.

Before nightfall, drinks will be drunk, voices will be raised and secrets will come spurting out like… well, you get the picture.

Its a sharply observed domestic drama with a touch of the ghost story. What director Christopher Stanton does with it is miraculous. The small audience (maximum 30) sits near and around a rectangular dining room table where most of the action happens, the better to see the family members reactions.

The actors are so convincing in recreating the rhythms of real speech that youll swear youre eavesdropping on actual conversations. Porter is harrowing, though she reveals her characters discomfort a little too strongly off the top Armour-Ostroffs changes feel real especially when a bombshell is dropped in the second act Hollyman nails a difficult monologue and Drakeford is intensely watchable as the nervous, quivering mom.

Rumblings in the sound design (also by Stanton) and subtle shifts in Nick Blaiss lighting snap us in and out of reality effectively.

Even the intermission space in the basement is used with imagination. But like the Lynch family at the start of the show, Im loathe to reveal surprises.

Having also helmed the memorable Laws Of Motion, Stanton is emerging as one of the indie scenes most intriguing directors.