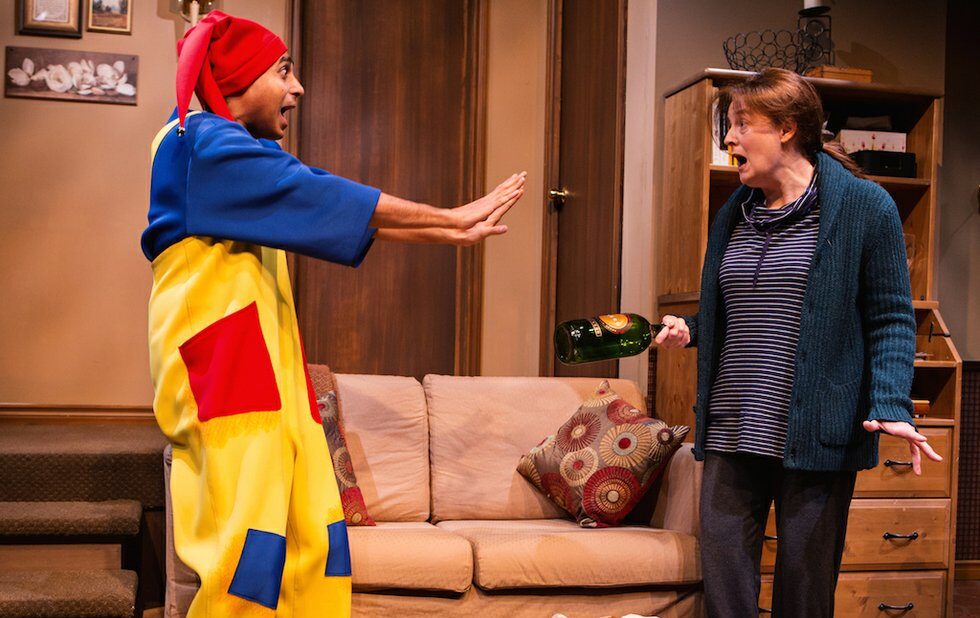 Kat Sandlers jaw must have dropped when she saw the Pixar film Inside Out and the character of Bing Bong, the goofy-looking imaginary friend still holding on to a growing child.

The title character of Sandlers new play is also a goofy-looking imaginary friend with abandonment issues. Mustard (Anand Rajaram) lives beneath the bed of 16-year-old Thai (Rebecca Liddiard), whos dealing with some pretty adult issues, like her mother Sadies (Sarah Dodd) alcoholism and impending divorce and a relationship with a 20-year-old university student named Jay (Paolo Santalucia) thats about to get more complicated.

Outfitted in Michael Gianfrancescos brightly coloured costume, complete with red jesters cap, Mustard is out of his league dealing with Thais problems. Hes outgrown his usefulness, which is probably why two hoodlums (Tony Nappo and Julian Richings) from his alternate universe are tracking him down and forcing him to retire.

Sandlers writing has a breezy, pop-culture-savvy feel to it, whether shes having her characters add Pop Rocks to champagne or letting them discuss the logistics of fairy tale characters. Her people are fun to hang out with.

But this work feels less focused than some of Sandlers Fringe plays. Nappo and Richings are fine in roles they frequently play in film, but there are too many moments of their Tarantino-esque baddies bickering about spelling and grammar. And hapless suitor Jay has little to do.

Mustards metaphoric meaning never resonates. Is the play about the loss of innocence? The absurdity of modern life? Im not sure Sandler or director Ashlie Corcoran have thought this through.

And theres a quirky quality to the scenes between Mustard and Sadie, who strike up an odd friendship. Rajaram gets to show both the happy and sad sides of his clown, while Dodd, given the most difficult role, suggests a woman with a complex backstory who once had dreams of her own.

When theyre both onstage, this Mustard heats up.