NOW MagazineCultureTheatreReview: Myth Of The Ostrich

Review: Myth Of The Ostrich

MYTH OF THE OSTRICH by Matt Murray, directed by Steven Gallagher, with Astrid Van Wieren, Alanis Peart and Renee Hackett. 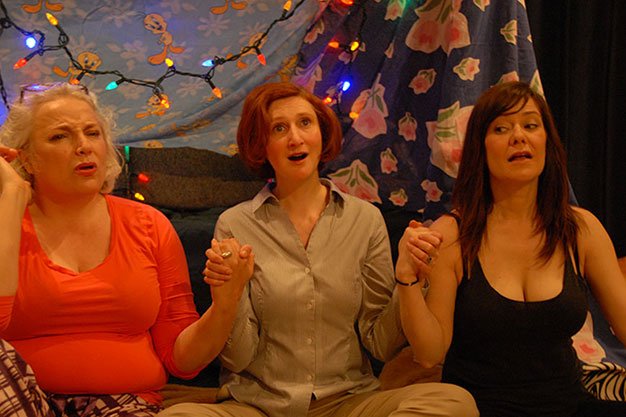 One antidote to these bitterly cold January days is sitting in a warm theatre, laughing your head off with the rest of the audience.

You can be part of that experience at Myth Of The Ostrich, Matt Murrays Fringe hit that brings together two mothers with differing views of life and child-rearing.

Liberal Holly (Astrid Van Wieren) lives in the Annex and writes self-help books, though shed probably never read them herself her life seems held together with Post-It notes. Conservative Pam (Alanis Peart) has recently moved to Toronto from small-town Alberta and is a devoted member of the Catholic Womens League. As the play starts, she shows up at Hollys house, worried about a letter she found, written by her son to Hollys child. Neither Pam nor her husband think its right for their teen son to be dating yet.

Murrays written a fine farce, one filled with secrets that certain characters cant discover. The audiences fun stems from watching how people do their best to distract, hide and minimize the unknowable from those who cant discover the truth. One of the secrets involves Cheryl (Renee Hackett), Hollys friend, who drops by with a package and is sucked into the comic vortex.

The three actors bring distinct energies to their performances, which director Steven Gallagher whips up to a fine frenzy as things become more confusing for the characters, both those with furtive knowledge and the innocent they want to keep that way.

Pearts protected, unworldly, uptight Pam is tightly wound for the first part of the play, though circumstances loosen her up later, while Hacketts broad, ballsy Cheryl, a Newfoundlander seemingly without an internal censor, goes on about everything from a lost condom to a lesbian cat.

Van Wierens vivid Holly is caught between the two, initially mediating but then finding herself pulled, along with the others, down a rabbit hole of deception and trickery.

But its not all laughs. Murray and company give added strength in the production by offering some serious thoughts on parental love, providing a heart beneath the laugh-filled moments.

The resolution is a little too neat and ties things up rather quickly, but Murray follows it with a revelation that ends the show with another good chuckle.