Review: Nature Of The Beast

NATURE OF THE BEAST by Brandon Crone (safeword/Long Wolf Collective). At the Storefront Theatre (955 Bloor West). Runs to April. 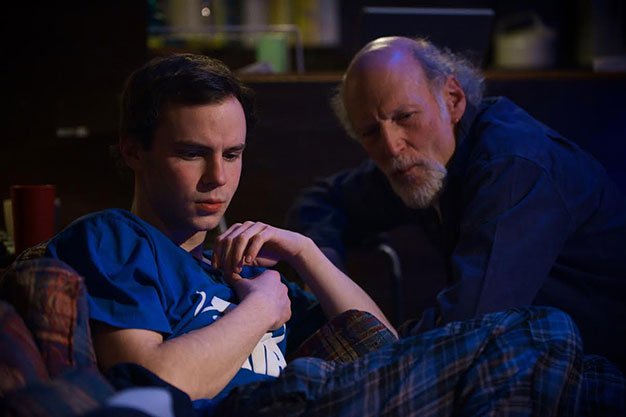 Young Mike (Jakob Ehman) is all tied up about what to do with his life, and things become more knotted when his religious mother throws him out when he says hes gay. The 17-year-old shows up at the isolated house in the woods belonging to his Uncle Francis (Nicholas Rice), where the older woodcarver lives a pretty hermetic existence.

Brandon Crones Nature Of The Beast explores their relationship and Franciss financial sideline as a dungeon master for hire. In fact, he has a new client, David (Clint Butler), locked for a week-long contractual visit in his basement when Mike shows up, though that secret doesnt remain hidden for long.

Crone tackles the material in a largely comic fashion, the contrast between the naive but sexually interested Mike and his nice, easygoing, hippy-ish uncle with a dark, hidden streak making up much of the play.

Theres some good writing here, and Rice and Ehman generate strong chemistry in their scenes together. Rice knows how to be light and genial part avuncular, part absent-minded prof but also suggests the occasional threat beneath his gentle words, while Ehman captures the teenagers uncertainty about how to define himself.

But the text could use some pruning, eliminating the repetition of points that define characters and relationships. Director Luke Brown could make the pace brisker.

The playwright knows how to generate laughs, but one of the best scenes, between Mike and the newly released David, has a sharp tension that could be a larger part of the action. Mikes clear curiosity about the master-slave relationship and Davids flirtatious interest in the shirtless teen combine in a nuanced episode that lets Butler demonstrate his acting skill.

The last 10 minutes, though, take us in an unexpected emotional direction. After almost two hours of comedy and a false ending thats comforting if not downright warm and fuzzy, the plot turns dark and nasty, anger and violence replacing consolation and gentleness. Its not unbelievable, just not sufficiently set up in the writing, and leaves us unsettled when the lights come up. Maybe thats what Crone intends, but a little more preparation would have helped the transition.

The scenography by Claire Hill, a frequent designer at the Storefront Theatre, takes the audience into the plays environment from the moment we step into the performance space. Spectators walk through Franciss woodsy yard complete with a wolf sculpture that resonates both literally and metaphorically in the play before entering his living room, where we sit cozily on the edge of the action.

bondage and discipline coming out