MOUTHPIECE by Norah Sadava and Amy Nostbakken, and QUIVER by Anna Chatterton (Nightwood Theatre). At Buddies in Bad Times (12. 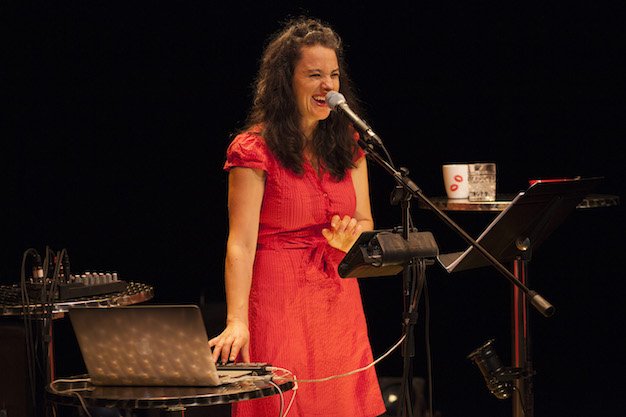 MOUTHPIECE by Norah Sadava and Amy Nostbakken, and QUIVER by Anna Chatterton (Nightwood Theatre). At Buddies in Bad Times (12 Alexander). Runs to November 6. $20-$45 tickets can be bought for one or both shows. 416-975-8555, buddiesinbadtimes.com. See listing. Rating: Mouthpiece: NNNN Quiver: NNNN

Quiver, the first of the two hour-long pieces, which can be viewed together or separately, is a solo show by Anna Chatterton that tells the tale of Maddy, an archery-obsessed 14-year-old who must fend for herself when her mother and older sister suddenly both move in with their respective boyfriends, effectively abandoning her.

The emphasis here is on audio experience. Chatterton, situated behind a microphone and surrounded by gear, impressively controls all the sound and lighting tech live onstage, constantly cueing sound effects and pitch-shifting her vocals as she switches between voicing Maddy, her sister and their sultry-toned mother.

Its a bit like the theatrical equivalent of a DJ set. Chatterton smoothly narrates the funny and disturbing story while hitting buttons, throwing switches, triggering samples and twisting knobs at just the right moment no easy feat. The performance can feel a little static she doesnt move out from behind the mic and tech set-up. But the compelling story and relatable characters are more than enough to hold your ear.

The stronger of the two pieces is a remount of Mouthpiece, a poignant and accessible experimental piece by Quote Unquote Collective that premiered in 2015 and won two Dora Awards before touring Canada. Here, Norah Sadava and Amy Nostbakken play two fragmented parts of the psyche of a Toronto writer whose mother has just died.

The duo, speaking in unison or in turn, describe in vivid stream-of-consciousness style the characters concerns and worries as she attempts to manage different aspects of her mothers funeral: flowers, a casket, a dress, the eulogy. Central to her thought process are deep reflections about womanhood and feminism occasioned by taking stock of her mothers life or just by the everyday grind in Toronto.

The narrative tacks nicely between the local and the general, describing situations many women will find instantly relatable, from the mix of smells in public washrooms to shopping for stockings at the Bay to handling unwanted attention from men on the street.

Utilizing creative movement and snippets of songs, the duo evoke a unique yet familiar world using nothing more than their bodies, voices and a large bathtub, which they repurpose in a number of clever and amusing ways.