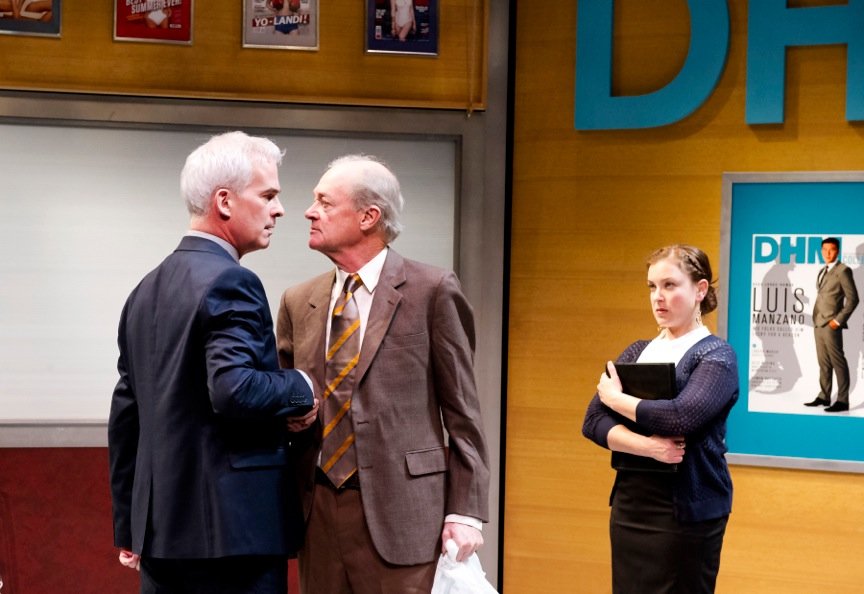 The settings are the inner workings of two magazines that feed consumers desires: Doghouse, which focuses on womens cleavage, and Electra, which promotes the perfect female body for women readers. In both, those in power, older than those around them, prey sexually on the office youngsters. (Can we escape the shadow of Jian Ghomeshi? Not these days.)

Aidan (Patrick Galligan) runs Doghouse with a brisk, friendly manner as long as he gets what he wants, both from his male assistants, self-impressed Rupert (James Graham) and shy Sam (Aaron Stern), and his female aide, Charlotte (Jessica Greenberg). Things get tense when they realize that their latest pin-up, Local Lovely 2014, isnt quite who she was represented as being Bradshaw, her father (Ian D. Clark) wants satisfaction for the error.

Over at Electra, the intriguing, stylish, cryptic Miranda (Susan Coyne) deals with her employees differently but looks for the same personal and publication profits as Aidan.

Kirkwoods script makes good points but has some weaknesses, too. The first scenes set-up is unnecessarily long, and Sams innocence and whininess are overdone.

Despite those problems, director Joel Greenbergs cast offers some fine work. Grahams shift from privileged, petulant pain in the ass to a more accommodating figure is scary, while Stern manages to make us feel sorry for Sam.

Greenbergs Charlotte is intentionally silent for much of her time onstage, but she has the right caustic touch when she does join in. Shes most fascinating when she stands sphinx-like behind the action, watching and forming conclusions shes not about to share with her boss.

Coyne feasts on Miranda, the seemingly open but totally controlling head of Electra. Frequently using a handcream tube how much is she covering up? this woman presents herself as a feminist who challenges patriarchal injustices but is herself as devious as Aidan. Just as importantly, Coyne reveals the vulnerability of an aging woman in a market where youth is all-important.

Greenbergs most canny directorial touch comes here. During a moment when Mirandas alone, she plays an aria from Mozarts Don Giovanni, sung by one of the seducers rejected, angry lovers.

The shows best scene is the confrontation between Aidan and Bradshaw, the power shifting back and forth between them as they negotiate and bluff, peek out from behind the masks they each wear and slowly reveal the cards they keep close to their chests.

Another plus is Denyse Karns set and costumes, lit by Kimberly Purtell. Karn first gives us a boys office, complete with lots of photographic flesh, football flag and competitive games, then turns it into Mirandas white world of cosmetics and soft grooming niceties. She does a spectacular make-over of public school punter Rupert, turning him from sharp-tongued joker to docile pleb.