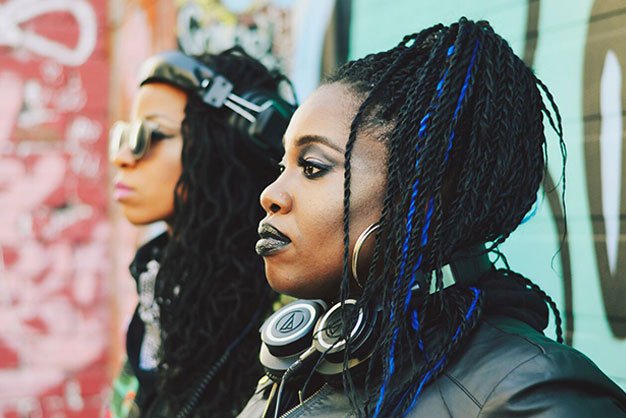 Compiling a history of music from the African diaspora is an enormous task, and while there are some inspired moments in Oraltorio: A Theatrical Mixtape, you can sense poet, emcee and playwright Motion struggling under the sheer weight of her subject.

Before the show begins, she’s onstage, her back to us, toying with a radio dial, giving us snatches of different genres of music. It’s a good metaphor for the show itself where she and co-creator DJ L’Oqenz leap from channel to channel: hip-hop one moment, blues the next, with rock, reggae, disco, gospel and everything in between to come.

It’s too bad the pair and director Mumbi Tindyebwa haven’t found a better way to structure the material. There’s a great scene where Motion, earphones on, finds a seat on the subway and composes rhymes. Elsewhere, thanks to the smart lighting of Andre du Toit, Motion turns into a disco diva and a Jimi Hendrix-type figure. And a strong bit near the end chronicles the rise and fall of an unnamed singer.

Video designs by Ramon Charles help establish a social context for much of the music, but images of African tribal dancing, minstrel performers and urban violence feel like the artists are checking boxes on a list, not creating an organic piece.

Motion is a magnetic performer with a big voice and enviable range. With some editing, this Mixtape could be fine not just musically but dramatically as well.