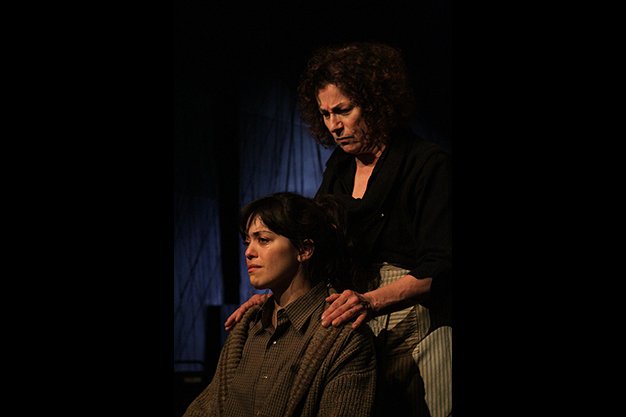 In Rose Napolis touching Oregano, imagination and memory go a long way toward accepting the need to goodbye.

Mona (Napoli), a post-grad student and would-be writer, has to face the imminent death of her father, Mimmo (Richard Greenblatt), whos in a coma following an auto accident. With her recollections of their time together and the assistance of a supernatural figure, La Strega Nera (Diane DAquila), the daughter comes to terms with losing her parent.

Depressing? Not at all. Napolis writing is studded with comic moments, snatches of Shakespeare and emotional echoes that resonate between scenes. Director Matthew Thomas Walker understands the scripts nuances, and his clear direction never lets the work veer toward the sentimental or the simple feel-good. In fact, its 70 minutes move quickly, with shifts into the past and a touch of magic realism handled easily and effectively by Patrick Lavenders lighting and Beau Dixons live music.

You could argue that the play happens solely in Monas head, for in the first words of the play Mimmo urges Mona to wake up. Its possible that she doesnt, that her father is calling to her in her mind, and all that occurs happens internally.

But that doesnt stop the confrontations between characters from being exciting and the action from being dramatically powerful. From the breakfasts shared by Mimmo and Mona to Monas encounter with the commanding Strega, the flashbacks to Mimmos own relationship with the black-garbed witch, and Monas learning to let her father go, knowing that a part of him will always remain with her, theres an emotional rightness to the playing out of the story.

Sitting on two sides of the action, the audience is wrapped along with the actors in Jenna McCutchens wonderfully intimate cats cradle of a set. Were all cocooned in Monas memories, living them with her.

For the first half of the play, Mimmo and the Strega loom large, dwarfing Mona. Instructing her in the art of life, one is literally and the other metaphorically a parent. Greenblatts Mimmo is endearing both as a wide-eyed, precocious, song-filled eight-year-old with a blue umbrella and as the parent who wants his daughter to be independent that independence includes her learning how to make his special pasta sauce.

DAquila is always fascinating to watch, her weather-controlling Strega full of mercurial mood shifts and with a face that exudes warmth and compassion even when shes verbally finger-wagging at Mona. Its this all-knowing woman who explains the plays title: both Mimmo and his daughter exude the aroma of oregano. DAquila also has a great moment when, filling the theatre with her extraordinary voice, she thrills viewers with lines from King Lears storm scene.

Napolis Mona is, perhaps intentionally, a less accessible and more reticent character than the other two, and we dont feel much for her until the midpoint of the play, when she acknowledges her flaws and becomes a more likable figure.

With the instruction and cajoling of Mimmo and the Strega, Mona learns the healing power of memory and the ability of the imagination to shape her future. That leads to a final scene of both letting go of Mimmo and taking in what he has gifted her, an episode thats buoyant and eminently satisfying.

Though Oregano has closed, you can catch Napolis work as part of this years New Ideas Festival at the Alumnae Theatre. Her play A Death And The Marias is part of the fests final week, which runs March 25 to 29 see alumnaetheatre.com/nif-week-three.html.