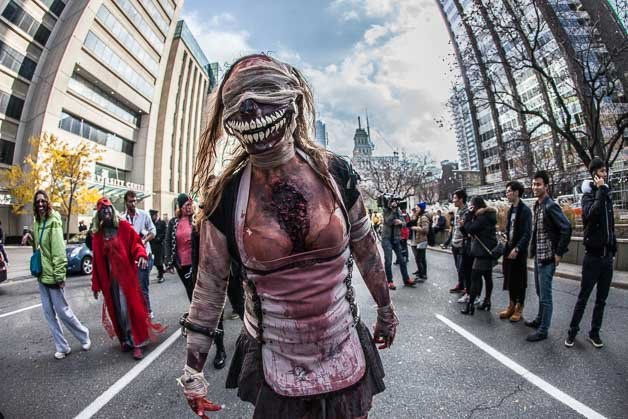 Roseneath Theatres always been at the forefront of companies for young audiences, tackling issues relevant to the school children for whom they perform.

The companys latest is Paul Dunns Outside, in which Daniel (G. Kyle Shields), a gay teen facing bullying and depression, is forced to move to another school, where he tells his story in the security and comfort of a Gay Straight Alliance (GSA) meeting. Meanwhile, Krystina (Mina James) and Jeremy (Youness Robert-Tahiri), friends at his former school, try to set up their own GSA.

Thats lots to cover in under an hour followed by an intriguing Q&A with the audience and the production sometimes hurries quickly over or truncates some of the points it wants to make. But director Andrew Lamb hits many salient topics, and the students at the school where I saw the show were focused on the action.

Dunn who you might remember as one of the three creator/performers of the excellent The Gay Heritage Project, which Buddies in Bad Times is bringing back next year for a national tour moves the action cinematically back and forth between the two schools as Daniel recounts his history before and at high school, while the other two try to formulate a mandate for their new club, in the process revealing their own feelings and attitudes.

The three meet when they are part of a history class group. At the start, Daniel is pretty well closeted and unsure of himself, Jeremys a jock whos well-intentioned but not always aware of the sensitivity of his language, and Krystinas the linchpin who holds them together.

Shields has the best scenes, including one in which he befriends himself in a washroom mirror, admitting what hes been denying for years: a door was kicked open in the back of my head and thoughts rushed out. The journey his Daniel goes on, which uses text messaging and other devices recognizable to the shows audience, is believable and touching.

Dunn also gives time to the other characters as they struggle to come up with reasons for needing a GSA and asking questions that Im sure the viewers also have, such as how to talk about being gay to a peer or how to handle a friends coming out to them.

Touching on vital issues, the productions coming back next year as part of Roseneaths 2015-2016 season, along with revivals of Robert Watsons The Money Tree and Chris Craddocks The Incredible Speediness Of Jamie Cavanaugh.