>>> Review: Pomona is a wild roller-coaster ride of games and mysteries 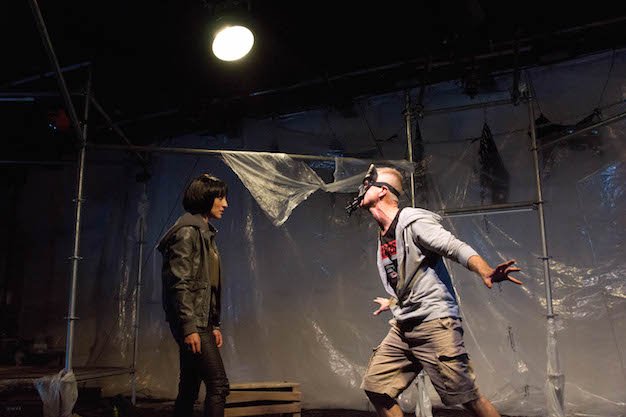 Ollie (Aviva Armour-Ostroff), seeking her missing sister, asks for the help of Zeppo (Carlos Gonzalez-Vio). He tells her of Pomona, a concrete island in the middle of the city, where strange things go on and where her sister may be.

Ollies world collides with those of Gale (Liza Balkan), who runs a brothel Fay (Deborah Drakeford), who works there Moe (Andre Sills) and Charlie (Ryan Hollyman), security guards who have a great serio-comic relationship and keep an eye on visitors to Pomona and Keaton (Bahareh Yaraghi), a young woman whos taught a role-playing game by Charlie based on Cthulhu, a maleficent figure created by supernatural writer H.P. Lovecraft.

The result is an intriguing mix of tales that weave in and out of each other and in which time is scrambled were presented with several versions of reality. At one point Keaton starts the game as a heroic figure battling the followers of Lovecrafts mythic, octopus-headed monster Cthulhu, and then Ollie morphs into thaty character. Moments of magic realism suggest that the planes of truth are thin, shifting and controlled by a role of the dice. The unnamed missing sister (also Armour-Ostroff) becomes part of the action…maybe.

Director Christopher Stantons production, set in a broad warehouse space and designed by Nick Blais and Jackie Chau, builds the tension powerfully, leavened at times by dark comedy involving an Indiana Jones film and later one characters fantasy to cover the world in his semen. Near the end of the show, Stanton and the company make marvelous use of flashlights and shared lines to take us viscerally into the Cthulhu game.

The cast is fine, too, revealing nuances in characters who could be played two-dimensionally. Drakeford exudes humanity beneath Fays fearful anxiety, while Balkans nasty, controlling Gale at one point reveals her own terror. Sillss Moe shares a moment of tenderness and a desire to change his violent life. Hollymans Charlie may be an idiot, as someone calls him, but he has a good heart and an awareness of others pain. Armour-Ostroff subtly distinguishes between the two sisters, the missing one more confident and open.

Almost everyone is, metaphorically speaking, under the thumb of someone higher up the ladder. Zeppo, who knows the kind of information he should seek out and what to avoid, is an exception and thus a free agent, despite his willful ignorance. Keep an eye, too, on Keaton, an enigmatic figure whose initial innocence is less certain by the plays end.

The dark world of Pomona includes snuff films, organ theft, vicious encounters (fight director Simon Fons work is bloody and believable) and several dreams of world annihilation. As one character says, Everything bad is real. This is an inevitability.

Pomona is a quick-moving loop-the-loop roller-coaster ride that keeps circling back on itself. Treat your journey to the out-of-the-way venue, a warehouse space on Geary Avenue, as part of the game.