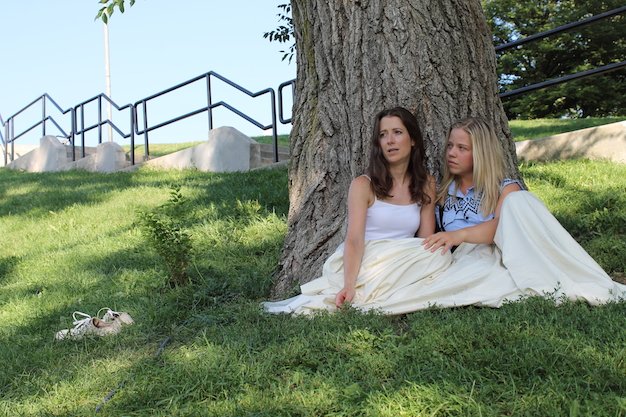 Shakespeare in the Ruff can be relied on for a stimulating, unusual take on the Bard, and the companys fifth production, Romeo & Juliet, continues the tradition. Much of the show works in terms of storytelling, but Shakespeares poetry isnt always delivered clearly.

Director Andrea Donaldson offers a modern interpretation (theres a touch of Rihanna and a call of You go, girl, along with Jenna McCutchens contemporary costumes), with the central couple played by two female actors, Kaitlyn Riordan (Juliet) and Vivien Endicott-Douglas (Romeo). This Romeo is gender-fluid, and his (the masculine pronoun is used throughout the play) interest in Juliet isnt an issue for most of those around him.

(This isnt the first time that local companies have cast a woman as Romeo there have been two other such productions recently.)

This is a world controlled by women: Veronas prince is female (Andrea Davis), and both warring houses are similarly helmed, with Phillipa Domville as Capulet and Ellora Patnaik as Montague.

The action moves swiftly in the companys new Withrow Park location, on a long flight of stairs and a hillside in the southwest section of the park characters go offstage by stepping behind trees or disappearing over the hill.

This production of the iconic love story may be short on poetry, but its believable in terms of Romeo and Juliets delight in their budding romance. Riordan is initially bookish but later impulsive and generous, Endicott-Douglas brash but with a hidden dreamy side that appears in the ballad he sings (with the audience as backup chorus) to her. Their balcony scene is both comic and touching, the control moving back and forth between them.

Brendan McMurtry-Howlett plays both the boyish, excitable Mercutio, here with a touch of wildness about him, and the more proper Paris, Juliets conservative suitor. Also doubling are Patnaik, as the bawdy nurse, who has trouble reading Google Maps and dances at one point with kathak-style ankle bells, and Lee, whose fiery, loose-canon Tybalt constantly insults Romeo by referring to him as she and, at one point, villainess. In this snipped version of the play, with a cast of eight, Wayne Burnss Benvolio is given more to do than in the original.

Too bad the language is occasionally muddied some performers convince us what their characters feel less through their words than through their passionate involvement in the action.

A special nod to Andre du Toits lighting: fairy lights hang from trees or are bunched with hidden flashlights into bouquets held by the actors to shine on themselves and others. Du Toit has also devised large and small balls, some covered with feathers, that illuminate dark spots on the hill or highlight a scene.

With the aid of those and other hand-held lights, he creates an ethereal, shimmering world Donaldson puts the lighting to good use, notably in Juliets funeral procession.