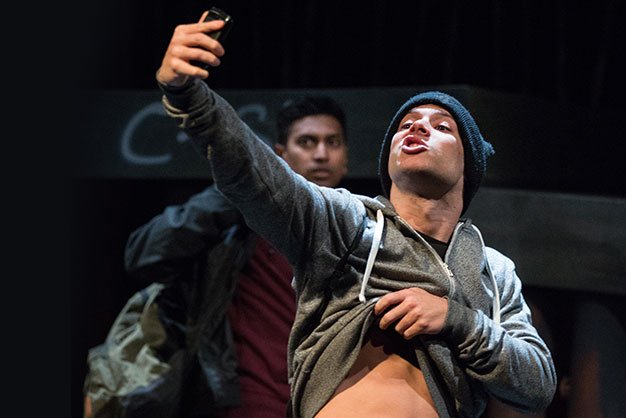 In England, Craig (Shelly Antony) and long-time pal Simon (Mishka Thebaud) discover the body of a young woman on the beach during one of their nighttime escapades spray-painting the local jetties. In Canada, homies Craven (Antony) and Simian (Thebaud) have to deal with Craven’s dangerous involvement with Marisha (Alejandra Simmons), the sister of a rival gang member. A touch of Shakespeare’s Romeo And Juliet gives extra context to the story, as does the suggestion of parallel universes.

In alternating scenes and then, in the play’s climax, switching quickly between these two worlds, Placey paints a compelling picture of tested comradeship and loyalty. Interspersed with these episodes are solo moments for Marisha, whose poetic words contrast with the guys’ everyday language she connects the two worlds.

Director Nina Lee Aquino‘s well staged production makes great use of Joanna Yu‘s set of beach pylons and platforms, lit by Michelle Ramsay, which at one point become the CN Tower. Aquino even takes some of the action into the audience, Marisha intentionally isolated from the worlds of the two pairs of men she observes.

The actors are fine, the men switching back and forth between their characters through accent and small costume changes still, it might take a while to get used to the Yorkshire pronunciation.

Simmons handles Marisha’s rhyming text, sometimes suggestive of spoken word verse, with skill, using it to give extra sensuality and otherworldliness to her character, who’s initially full of life and energy.

Antony’s Craven and Craig have a touch of the conservative about them. The Canadian teen believes in the status quo but wishes tradition allowed him to get involved with Marisha his British counterpart, in a relationship with a young woman, has a sense of stability.

Placey gives Thebaud more nuanced roles, figures who break more clearly with convention. Simian knows how to play all the angles to help himself and Craven, while Simon, desperately in need of a family, turns to childhood memories and Craig for emotional support.

Though the script is occasionally overwritten, with a few more back-and-forths than necessary, the production is compelling, leaving us with questions as well as a few answers in this exploration of friendship’s potential demands.