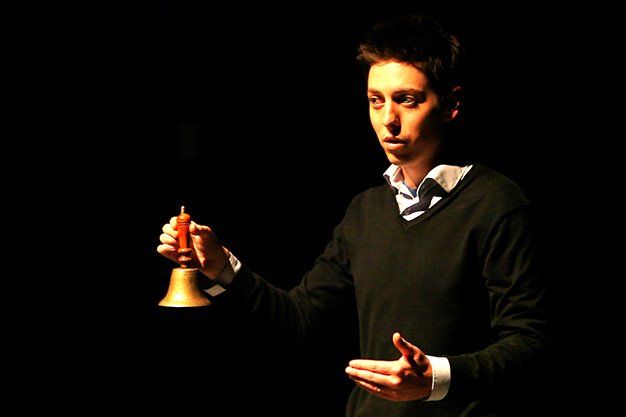 Halloween is still a month away, but you can get into the spirit of things literally at an odd little show at Theatre Passe Muraille Mainspace.

Presented and performed by illusionist Nicholas Wallace, Seance is part history lesson about spiritualism and raising ghosts and part actual seance. For believers and skeptics alike, its an engrossing, and at times shiver-inducing, night of entertainment.

Wallace and director Luke Brown employ lots of multimedia in the history portion of the show. As a Victrola plays scratchy tunes from another era, Wallace presents a slide show of mysterious archival photographs that -appear to show ghost-like figures hovering over their subjects. Real or doctored? Its unclear.

Then he uncovers a supposedly haunted rocking chair that he tells us survived a fire in a place called the Quinte Hotel in Belleville. (Google it and youll see there really was a fire.) A chosen audience member sits in it were told the chair will choose the person and some uncanny things involving a doll, levitation and a Ouija board occur.

The grande finale (were given the opportunity to leave the theatre if were uncomfortable) involves raising the spirit of a missing boy. To do this, the audience sits in complete darkness, exits are blocked and, by holding hands and invoking that spirit, we….

Well, I wont spoil what happens. Lets just say that even without the sound effects I nearly jumped out of my skin a couple of times. Some things happened that I cant explain. And if there were any plants in the audience, they were damn convincing ones.

Wallace isnt that great an actor a Lincoln joke bombs but his stolid, serious presence actually adds to the shows authenticity.

By the end youll believe perhaps not in ghosts, but that hes a first-rate illusionist.