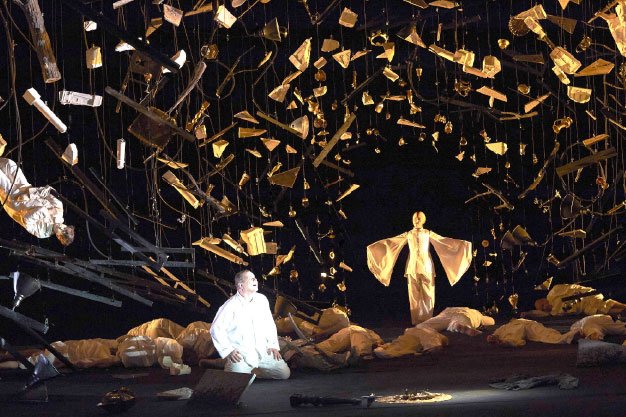 But the score, complete with Wagner’s dozens of leitmotifs, is richly layered and complex. And the libretto is deeply philosophical, dealing with identity and memory.

Debus’s confident conducting, combined with Francois Girard‘s striking production and a fine group of singing actors, give this work the passionate intensity of a fevered dream.

The five-hour production (yup, you read that right) chronicles the heroic journey of the eponymous character (Stefan Vinke), spawn of the incestuous siblings Siegmund and Sieglinde.

Born fearless and raised by the cunning dwarf Mime (Wolfgang Ablinger-Sperrhacke), Siegfried must make a sword, slay a dragon (Philip Ens) who’s hoarding the all-powerful ring and, thanks to the advice of a forest bird (Jacqueline Woodley), rescue a woman on a mountaintop surrounded by fire. That would be Brunnhilde (Christine Goerke), his aunt.

Michael Levine‘s designs make brilliant use of vertical space, with elements from his set for Walkure now suspended above the action, suggesting everything from a forest and a cave to, more metaphorically, a universe in flux and the weight of collective history bearing down on one man.

No spoilers, but lots of surprises emerge from that set.

German tenor Vinke has a heroic voice and solid stage presence to evoke the young, cocksure protagonist. If his pipes seem to lack power in the second act, it’s because he’s holding back for the marathon duet with Goerke in act three.

Alan Held‘s Wanderer is magisterial and authoritative Ablinger-Sperrhacke’s Mime is clear, menacing and physically nimble, and the booming-voiced Christopher Purves makes the dwarf Alberich into a figure seething with anger and greed.

Woodley’s sweet soprano is just right for the forest bird, while Meredith Arwady (remember that name) has the contralto of your dreams as the earth goddess Erda.

Goerke doesn’t appear until the final scene, but she makes you forget that from her iconic opening notes to those soaring melodies familiar from Siegfried’s Idyll.

But it’s Debus and the first-rate orchestra – the horn call comes off perfectly – who add the muscle and metal needed to forge this essential link in the Ring.