Review: Spirit Horse gallops along with a strong story 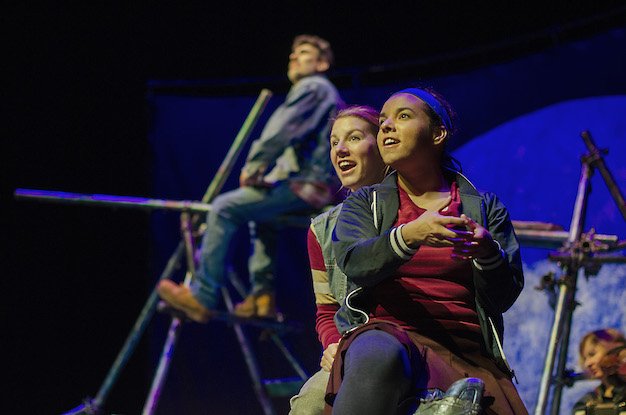 How can a native family from Albertas Stoney nation blend their traditions with life in an urban centre?

At its centre are two sisters, Angelina (Lisa Nasson) and the older Jesse (Brianne Tucker), whose father (Cameron Johnston) was a rodeo star until his wife died as the story opens, he has no motivation to do anything but sleep.

Their grandfather (also played by Johnston) brings the children, who live in Calgary, a horse that emerged from the lake near his prairie home. The proud and unbroken white steed, dubbed Wild Wind (also the familys surname and that of the mountain near their original home, where Angelina was born), becomes the source of the characters emotional renewal when the girls steal it from a man who buys it for his rodeo and travel with the horse back to the lake.

Its suggested early on that the animal is a spirit horse, possibly their dead mother.

All three performers shift effortlessly between their central roles and various others, even becoming dogs and helicopters. They each play Wild Wind at some point, Johnstons being the most believable of the characterizations.

Some of the best scenes are quick comic sketches, such as when the grandfather first arrives in noisy, busy Calgary, and how Angelina and Jesse get Wild Wind up to their apartment high above the ground and the trouble of keeping her there.

There are tender moments, too, which could be better developed. Its Nasson who evokes much of the plays tenderness, with the help of musician Anne Lederman, onstage throughout, playing violin, drums and accordion.

Taylor neatly encapsulates the difference between the natural and city worlds, and white characters passing disparagements of the native family provides a sometimes subtle lesson in racism for young viewers of this family show. I hope parents talk later with their children about those comments and how the words make the two sisters feel.