Review: Subway Stations Of The Cross

SUBWAY STATIONS OF THE CROSS by Ins Choi (Soulpepper). At the Young Centre for the Performing Arts (50 Tank House).. 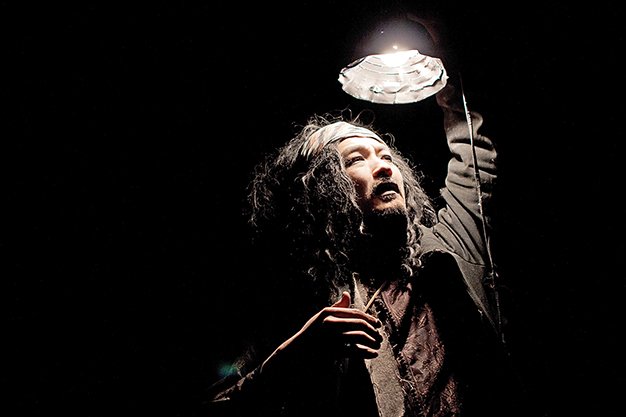 Ins Choi‘s Subway Stations Of The Cross will give you something to ponder next time you pass a busker or spoken word artist on the street or in the bowels of a TTC station.

We hear Choi’s unnamed character before we see him, harumphing and growling in a voice that sounds like he smokes the same brand of cigarettes as Tom Waits. When he appears, bundled up in layers of clothes and blankets, his head wrapped in a Jack Sparrow bandana, he gruffly mutters a bunch of poetic utterances that touch on religion, social inequity and pop culture. He even throws in a few knock-knock jokes.

His props include a portable light, which he uses for some dramatic visual effects, and a loaf of bread and bottle of wine, which, in true Biblical fashion, he transforms in a couple of simply staged but novel scenes. And he’s got a ukulele to strum for a several songs.

The material is more playful than profound, especially a ditty about his obsession with 80s sitcoms.

And while there’s no through line or recurring characters to hang even a slight narrative on, there’s a bold experimental feel to the show that is brave, considering this is Choi’s follow-up to his crowd-pleasing Kim’s Convenience.