NOW MagazineCultureTheatreReview: Tails From The City

Review: Tails From The City

TAILS FROM THE CITY by Marjorie Chan and the company (Common Boots). At Evergreen Brick Works (550 Bayview). December 23. 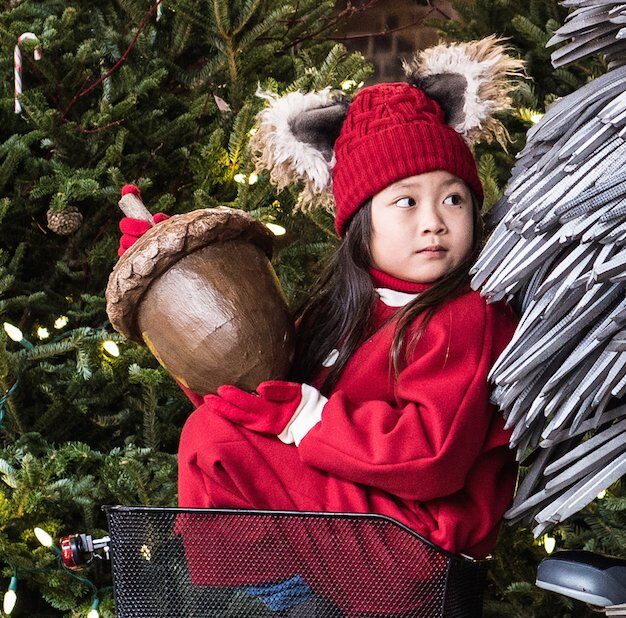 Squirrels and foxes and raccoons…oh my!

Those urban animals are front and centre in Tails From The City, the fifth annual walkabout show at the Evergreen Brick Works, presented by Common Boots Theatre (formerly Theatre Columbus).

Marjorie Chans play, developed with the company, focuses on six-year-old Billie (Eponine Lee), recently motherless. Her father (Derek Kwan) does his best to fill the parental gap, but Billies hurt and angry she doesnt want to take part in her schools Christmas Eve pageant and sulks in bed.

Looking out her bedroom window, she sees some raccoons rifling through a shipping crate and turning up presents, including a bicycle. She joins them, along with the audience, and were off on a trip through the Brick Works and the nearby forest area.

A family of squirrels and a curious fox become part of the action, as do a pair of well-off partners (Lucy Hill and Michael Rinaldi), lovey-dovey on the surface but reeking of privilege and acquisitiveness, and a hassled, unhappy guy (Courtenay Stevens) whos left his long-time job in the far north to act as consultant on delivering presents to kids. Could he be a modernized Santa?

Over the course of the night, Billie joins with the wild critters and becomes more and more animal-like herself, sprouting a tail and furry ears. She takes part in a game of shinny with her new friends, enjoys shots of milk (along with cookies) with the consultant guy and dances at a holiday meal.

We next meet her on Christmas morn, the story ending on a Wizard Of Oz or Christmas Carol note…was it all a dream?

Since the focus of this years show is on the city and the two-and four-legged creatures who live there, the staging carries the audience not into the fields behind the Brick Works but rather in the other direction, to the parking lot and dog walk cars are part of the action, too. We get city views as backdrop rather than the hills that surround the buildings. Too bad theres no snow to help set the holiday mood, but there are rotating choirs (musical direction and sound design by John Millard) who contribute seasonal tunes.

Under Jennifer Brewins energetic direction, the company is at its best in the animal world, Anna Treuschs costumes a marvel of simplicity and suggestiveness in Glenn Davidsons ever-changing set and lighting design. The self-centred couple, who fight more than they spoon, are also a nice comic diversion.

At the shows conclusion were back inside and served hot chocolate and Timbits youll realize that the tale of Billies loss, acted-out rage and eventual return to her fathers love could be more fully fleshed out. What youll remember are the furry creatures and their tails.