Review: The Circle draws together six teens trying to connect 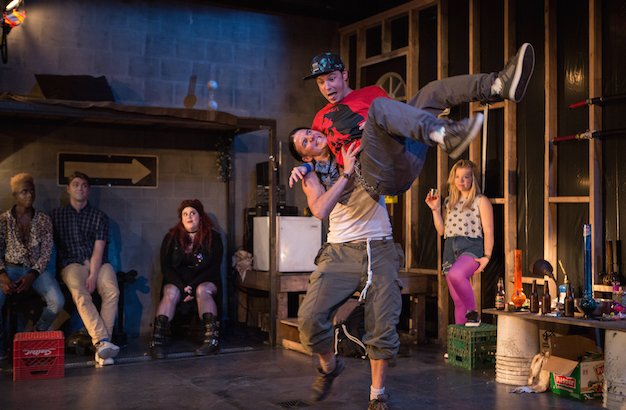 Familys a funny thing. You may have trouble living with family members yet youd be lost without them.

The six characters in Geoffrey Simon Browns often exciting The Circle, sometimes friends and sometimes opponents, unconsciously make their own family unit, though its not always a happy one.

Ily (Jakob Ehman) lives in Amandas (Vivien Endicott-Douglas) mothers garage, though they plan to move into an apartment together. She invites her friend Will (Daniel Ellis) and his boyfriend, Daniel (Jake Vanderham), to visit, while Ily gets a call from an old acquaintance, Tyler (Brian Solomon), who insists on coming over the same night with his maybe girlfriend, Kit (Nikki Duval).

The grungy garage nicely captured by set designer Patrick Lavender and lit by Rebecca Picherack, whose creative design defines other locations in the story filled with Ilys numerous bongs, beer, jerry-rigged furniture and Christmas lights, is the backdrop for a series of encounters, some sensual and some explosive.

Ranging in age from 15 to 18, the plays teens are filled with anger, desire and loneliness. Not always able to express their frustration, theyre quite capable of acting it out. Each comes from a family defined by alcoholism, neglect or too much control, and as they get and more stoned (pot, THC, alcohol and nitrous oxide are all part of the mix), we learn about their alienation from those close to them.

Though his dialogue is strong, Browns writing doesnt flesh everyone out sufficiently Will and Amanda could use more shading. Still, theres fine work by the cast, notably Ehmans hyperkinetic Ely and Solomons testy Tyler (who wants to be called Mutt). Also impressive are Duvals often quiet but still wonderfully expressive Goth girl Kit, perhaps the most aware and together of the six as well as the source of the plays occasional humour, and Vanderhams Daniel, the son of a priest and, despite his sexual orientation, the straightest of the group.

The childhood relationship between Ily and Tyler is at the centre of the play, and the actors explore the friction built into their long-term bond, which switches from gushes of enthusiasm to moments of sulky quiet.

Director Peter Pasyk shows again how skilled he is with emotionally raw characters, knowing how to reveal their pain along with their menace. Theres no better example of this than Tylers final poetic, revelatory monologue, which gives us a totally different sense of a teen whos previously been off-putting. Watch how Pasyk stages those last moments and how he picks up on imagery that reflects the plays title and its opening scene.