NOW MagazineCultureTheatre>>> Review: The Divine – A Play For Sarah Bernhardt

>>> Review: The Divine – A Play For Sarah Bernhardt

THE DIVINE: A PLAY FOR SARAH BERNHARDT by Michel Marc Bouchard (Shaw Festival). At the Royal George Theatre, Niagara-on-the-Lake. Runs. 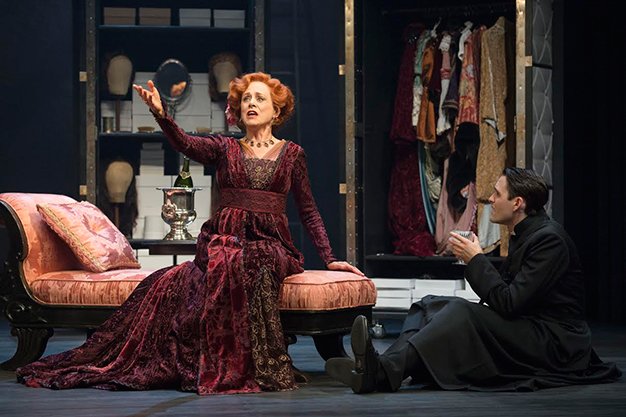 The subtitle is a play for her, not about her, and the idea of divinity refers not just to the actor but also the force of self-righteous religion.

Bouchards script, commissioned and premiered by the Shaw Festival under Jackie Maxwells incisive direction, is set in 1905 Quebec City, where Bernhardt intends performing a show that deals with adultery and, through one of its characters, mocks the church.

The archbishop sends two seminarians to deliver a letter forbidding that performance. Michaud (Ben Sanders), well-to-do son of the finance minister, adores the theatre and, only less slightly, Bernhardt herself. Down-to-earth Talbot (Wade Bogert-OBrien), some of whose impoverished family work in a shoe factory, has no interest in the arts and seethes with anger for past injustices.

Bernhardt (Fiona Reid), bored with potential new scripts, sees in Michaud a budding playwright who might pen a work with a striking lead role for her, even though his idea for a play is a social drama distinct from the classics that made her a star.

What follows is a series of strong theatrical confrontations: between the novitiates Bernhardt and Michaud the rich and the poor, touching on differences of both money and spirit Talbot and controlling Brother Casgrain (Martin Happer).

The lead actors are all first-rate. Sanders is fully engaging as the melodramatic Michaud, who sees church trappings as theatrical costumes and longs to explore ordinary humanity in his play, though all he knows of the poor is what hes read in books.

Bogert-OBrien is equally powerful as the passionate Talbot, devoted to his family, drawn to a woman in Bernhardts company (Darcy Gerhart) but unable to let go of past injustices within church walls until hes tempted by a figure in black.

Though she doesnt appear until nearly an hour into the play and Bouchard makes an inside joke about this when she does Reid is always fascinating, bandying words with those in her train, being sarcastic about the clergy, enjoying the myth of La Bernhardt (she devours Michauds adoration, their first scene together one of mutual seduction) and in a few rare instances admitting self-doubt.

There are actually two Bernhardts in the play. One we see in the dressing room and onstage the other is Michauds invention, a white-gowned, shimmery, poetic creature who realizes the very different lots of the well-off and the downtrodden.

Also strong are Mary Haney and Kyle Orzech as Talbots mother and younger brother, whose numbing work pays for Talbots seminary training, Andrew Bunker as Bernhardts cautious manager and Happer as a caustic priest with a secret.

Bouchards best-known work, Lilies, uses the device of a dramatic performance to tell a story and also comment on the power of theatre. He returns here to theatres potency, with Bernhardt responding to the archbishops letter from the stage, defending the role of art for the betterment of humankind.

But the script, translated by Linda Gaboriau, still needs some work. It has strong threads but theyre not yet well knit into a whole. Some of the episodes need additional development, notably those in the factory even Ric Reid, a fine actor, cant do much with his two-dimensional role as the sweatshops boss. Bernhardts paean to theatre is more heavy-handed than necessary.

Michael Gianfrancescos basic set, a stark dorm room with a high window at the rear, is largely black, white and gray, given colour by the costumes in Bernhardts sensual surroundings. Bonnie Beechers lighting helps contrast the spiritual and the worldly.

Though The Divine isnt quite celestial, its still a fascinating, moving, ambitious piece of theatre.