NOW MagazineCultureTheatreReview: The Dog And The Angel

Review: The Dog And The Angel

THE DOG AND THE ANGEL by Martha Ross (Theatre Columbus). At the Evergreen Brick Works (550 Bayview). December 22-23 and. 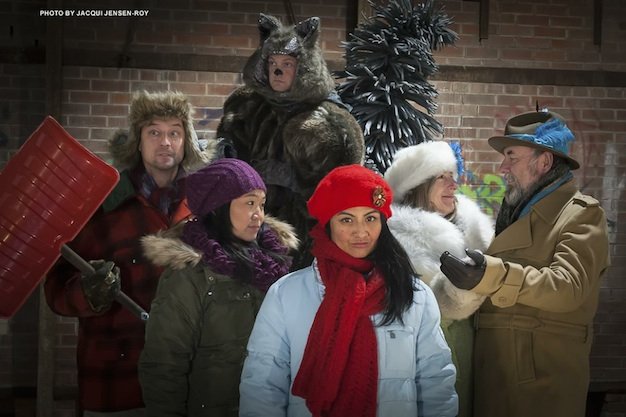 Family were stuck with them, for better or worse.

In Martha Rosss warm and quirky The Dog And The Angel, which is this years Theatre Columbus holiday production at the Evergreen Brick Works, what starts out as worse becomes way better by the end.

The audience become guests at the Pine familys Christmas party, where our hosts are Barker (Courtenay Stevens) and his wife, Rozel (Jennifer Villaverde), their daughter, Isabel (Connie Wang) and Rozels parents, Claire (Leah Cherniak) and Sampson (Paul Rainville). Rozels a frantic host, worried about their unseen nasty neighbour and even more concerned when she learns that the angel ornament for the top of the Christmas tree, a generations-old family decoration, has been broken and throw away.

No one but Isabel pays much attention to the fact that the family dog, Augie, is sick and needs a vet.

This is a family that clearly rides its hobbyhorses. The fixated Rozel goes off to the dump to find the angel, followed by Barker, while Isabel and her grandparents head off to get Augie some medical attention.

Guided by a huge glowing acorn atop a pole, we follow first some characters and then others. The acorn is an appropriate image, for another major figure in the action is a large, brushy-tailed, chittering squirrel (Michael Rinaldi) who causes mischief and helps move the action along.

As we travel from the dump to the hideout of a mysterious figure, from a platform for dancing to Barkers staircase encounter with a man from his past, were serenaded with seasonal songs by one of a rotating group of choirs as well as recorded melodies by music director John Millard.

The characters, often charming and intentionally larger than life, energetically search outside and inside themselves for personal truths as well as their hearts desires.

Theyre all lost in some fashion at the start of the show except maybe the squirrel but by the end theyve found happiness and family again. That lost-and-found theme lightly echoes Biblical verse, appropriate for this December holiday. Theres even a death and resurrection, which looks forward to another Christian holiday, but here it sure helps to bring everyone together at the end.

Director Jennifer Brewin makes fine use of the Brick Works, with the action happening mostly in the kiln building huge vistas alternate with intimate scenes. She underlines the comedy nicely, notably in the dumpster episode, which involves music and other sorts of lessons, and, near the plays end, Barkers discovery of whats really important in his life.

Designer Glenn Davidson again works magic with his lighting the lair of One Eyed Jack is a special treat.

I wish wed spent more time out in the fields behind the Brick Works, but this is largely an urban tale, better suited to our being surrounded by architecture rather than the natural world. Still, the final scene takes place outdoors, and the night I was there, the stars shone brightly on the satisfying final tableau.

Bundle up for this warm and quirky show. Youll spend about an hour in the night-time cold, though when you return to the heated starting location youll be treated to hot chocolate, tea and sweets.