THE DYBBUK, OR BETWEEN TWO WORLDS by S. Ansky, adapted by Anton Piatigorsky (Soulpepper). At the Young Centre (50 Tank. 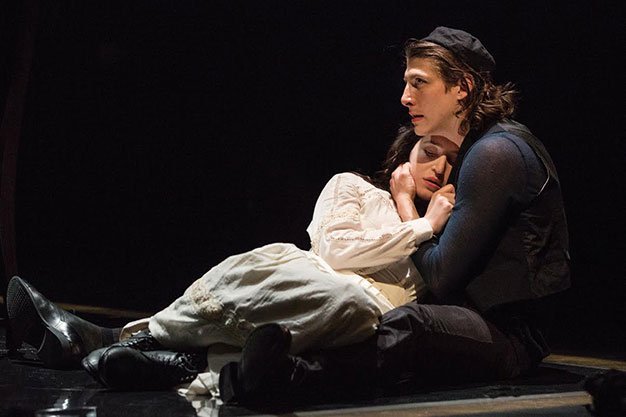 S. Anskys classic Yiddish play The Dybbuk, Or Between Two Worlds, combines ghosts, all-consuming love and the portrait of a self-contained community threatened by change.

The Soulpepper production, adapted by Anton Piatigorsky and directed by Albert Schultz, is thrilling and powerful, with some breath-taking theatrical moments.

The shtetl of Brinnitz houses an insular group of Jews who follow the ways of their forefathers. When the poor, fiery scholar Channon (Colin Palangio) cant wed Leah (Hailey Gillis), daughter of the rich Sender (Alex Poch-Goldin), the young man turns to the forbidden teachings of the Kabbalah to win his beloved.

A series of incidents leads to Channons death and his transformation into a dybbuk, a shade that possesses Leah. The renowned Rabbi Azriel (William Webster), called in to perform an exorcism, discovers a secret from the past that requires convening a court of law where the dead accuse the living of a crime.

In the first part of the play, Ansky portrays a community fearful of attack from without and within. Susceptible to pogroms, its members follow long-established rules and exhortations, believing in apocryphal tales and superstitions intended to keep everyone on a narrow path of defined behaviour. People invoke blessed memories of ancestors and wise rabbis, spit three times to ward off evil spirits and look dubiously at anything that changes the status quo.

This set-up is one of the productions few flaws: it goes on longer than it needs to to let us understand the plays world the central story doesnt get under way soon enough.

The acting ensemble is generally strong, the key figures all memorable, beginning with Diego Matamoross Messenger, a worldly-wise outsider with a supernatural knowledge of what will happen in this troubled society. Websters Azriel begins in self-doubt and moves to commanding patriarch, with John Jarvis providing a sharp cameo as Mikhl, his assistant.

But the crowning performances are by Gillis and Palangio, she the shy but curious maiden and he the impetuous student who turns to the Kabbalahs illicit knowledge of numbers and codes to obtain what he must have they are clearly obsessed with each other. Its no surprise when, after Channons spirit possesses Leahs body, they are joined visually and vocally.

Palangio makes the initially voracious and off-puttingly stubborn Channon a sympathetic figure, while Gilliss Leah, by the end, combines delicate innocence and sensual passion. The plays poetically magical final moments focus on these two and conjure up a stunning image you wont forget.

The largely black and white design is a marvel. Lorenzo Savoinis set includes a series of sheer black curtains that are gradually lifted to reveal the vivid action. Parts of the set have a double function: a dining table becomes the synagogue ark that holds the Torah, and benches turned upside down are transformed into cemetery tombstones. Bonnie Beechers lighting plays expertly with bright illumination, darkness and shadow, the lines of the box in which the characters live and interact clearly delineated by laser-like beams.

Shannon Lea Doyles mostly dark costumes underline the insular societys somberness, while the sound design and composition by Mike Ross and Richard Feren both incorporate traditional Hebrew melodies and suggest the ominous world of demonic spirits who impinge on the living.