NOW MagazineCultureTheatre>>> Review: The Forest is filled with dark humour

>>> Review: The Forest is filled with dark humour

THE FOREST: AN EXHIBITION OF CAUTIONARY TALES by the Red One Theatre Collective (Red One). At the Storefront Theatre (955. 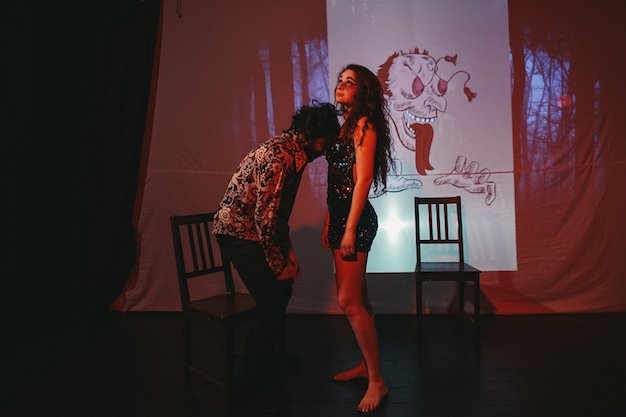 THE FOREST: AN EXHIBITION OF CAUTIONARY TALES by the Red One Theatre Collective (Red One). At the Storefront Theatre (955 Bloor West). Runs to May 8. $25. thestorefronttheatre.com. See listing. Rating: NNNN

If you go down to the woods today, youre in for a big surprise.

Well, make that The Forest instead of the woods, and the surprise is a series of wily, entertaining sketches dressed as cautionary tales.

The creation of Red One Theatre Collective, the several stories are framed by the interaction of an innocent boy (Kaden Boland-Trowbridge) and a sinister figure called the Aufseher (the vocally and physically mesmerizing John Fleming), who appears after the boy has knocked down the Aufsehers house of cards. As the youngster retrieves one card after another to rebuild the house, each reveals, through the Aufsehers assistants, its warning to the boy and the audience.

Were part of the action, too, since some of the cards are distributed to us at the start of the show the evenings entertainment is determined by which order we offer them to the boy. But beware theres a black card in the mix, and if and when its chosen, the boy becomes part of the house of cards and the game/show is over. An alternate card gives the boy his freedom.

The actors multiple talents and quick character sketches are put to good use in all sorts of narratives. In one, a lazy farmer thinks he can best a leprechaun and win her gold in another, a lascivious man with a breast fixation gets done in by his desires.

Using the format of a support group, a collection of injured toys tells a marvellous puppet story about the boy who disfigured them all and the revenge taken on him another segment shows the danger of shooting a cactus if your head is a balloon.

My favourite, The Onion Wives, is a savvy send-up of macho attitudes and a look at the budding feminism among the small-town women who discover a new vegetable. It nicely shows off the talented ensemble, who in their generic form resemble spider-like zombies: Christopher Darroch, Hamilton, Thalia Kane, Andrew Lawrie, Julia Nish-Lapidus and Lesley Robertson.

There may be warnings embedded in the stories, but the emphasis is on fun and cleverness. And yes, depending on which tales you see, a few teddy bears take part in the action.