THE LAST WIFE by Kate Hennig (Stratford Festival). At the Studio Theatre, Stratford. Runs in rep to October 7 see. 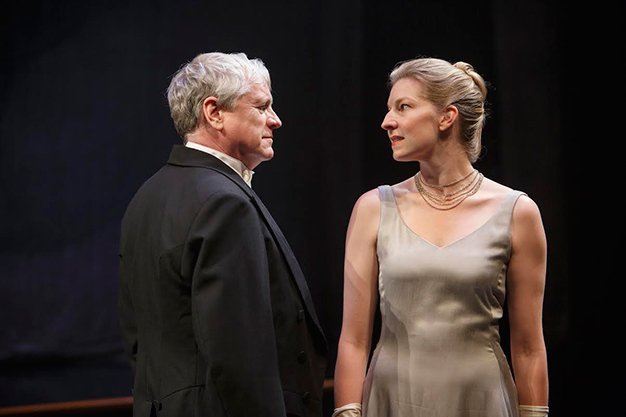 But hers isnt your usual family. The characters are the king, queen and future rulers of Tudor England.

At its centre is Katherine Parr (Maev Beaty), the sixth and final wife of Henry VIII (Joseph Ziegler), who outlived her husband and married her lover, Thom (Gareth Potter), within months of Henrys death.

In Hennigs feminist tale, Parr one of many C/Katherines in Henrys life attempts to share in running his kingdom and, just as importantly, convinces the impulsive, volatile ruler to accept his previous wives daughters, Mary (Sara Farb) and Elizabeth (Bahia Watson), as family and part of the chain of Tudor succession. Of course, in this patriarchal court, they rank below the young prince, Eddie (Jonah Q. Gribble).

Told in a series of short, filmic scenes, the action moves quickly from Henrys courting read demanding of Katherine, her success in reinstating the young women Henry considers bastards, taking some control of the country when Henry goes to war in France, and the misstep she makes in thinking she can retain that control.

Though the material is historically accurate, the plays tone and some of its language are contemporary. We could be watching a dynastic family in todays business world, but the stakes are much higher and played out on a national stage.

Alan Dilworths expert direction rightly focuses on the domestic story, eschewing grandeur for the human element of shifting relationships. Its matched by Yannick Larivees intentionally simple set, lit by Kimberly Purtell a multi-use table and some chairs, a curtain upstage that parts to show the back of a throne, suggesting were mostly in private rather than public quarters which is literally topped by an upside-down model of Hampton Court the male world of the palace is turned on its head by the possibility of women in power.

The script, filled with humour and passion, offers one powerful confrontation after another as well as the tenderness and trust that grows between Katherine and her newfound daughters. Even the bullying Henry has a protective side, revealed when he talks about Jane Seymour, his third wife, who died giving birth to Eddie.

You couldnt have a better cast, including the charming Gribble, whose Eddie cant stand to listen or watch when his parents fight at the dinner table, and Potters initially flirtatious and open but later worldly-wise Thom. Farbs rebellious, acerbic Mary, dressed in goth black, and Watsons girlish, instinctively intelligent Elizabeth are first-rate.

Zieglers mercurial Henry is never predictable he occasionally reveals a sensitive side that surprises his wife and the others around him. Still, when Henry says to Katherine, if you tell anybody, Ill have to kill you, were not sure nor is she whether hes joking.

But its Beaty who burnishes this production, her Katherine always aware of walking on a swords edge yet never hesitant to forward an agenda for herself, her husband and her kids. Complex in weaving that agenda, she allows various emotions to wash across her face as Katherine considers different courses and chooses one over another.

What Katherine wants, and arguably gets, is a real partnership with her older husband: a sense that he acknowledges her use and power in his realm and his life.

Still, the play ends on a note of tension among the remaining characters. And thats a good thing Hennig has plans for more scripts based on these fascinating characters.