>>> Review: The Marriage of Figaro 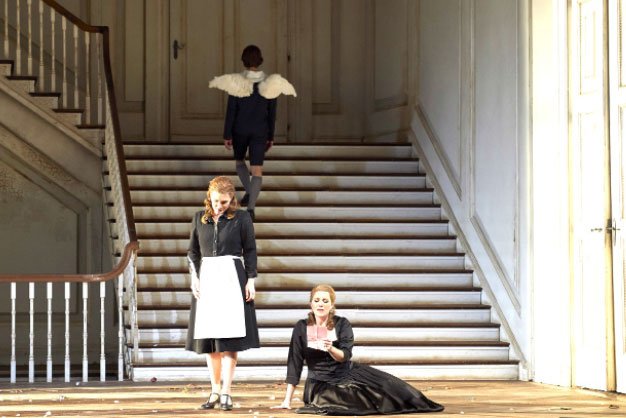 seemed to be everywhere in 2016.|Anna Chatterton|Oliver Dennis is a great comic actor

You’ll probably never see a darker version of Mozart‘s comic opera The Marriage Of Figaro than that staged by director Claus Guth.

In a traditional version, the work’s commedia dell’arte roots are clear here, Guth goes for a more threatening concept. The result is a production set in a regal but mouldering house, in designer Christian Schmidt‘s tones of mostly black and white, lit by Olaf Winter. Despite the visuals, the emotional nuances of what we witness cover many shades of grey.

Figaro (Josef Wagner) and Susanna (Jane Archibald), servants of the Count (Russell Braun) and the Countess (Erin Wall), are to be married, but before the ceremony the libidinous Count intends to take his droit du seigneur and sleep with Susanna. Added to the romantic mix is Cherubino (Emily Fons), a young male page drawn to every woman he meets, including the maid Barbarina (Sasha Djihanian). Then there’s the older Marcellina (Helene Schneiderman), who has her eye on Figaro.

The director adds another player, Cherubim (Uli Kirsch), a winged Cupid-like figure dressed like Cherubino, who plays puppet master, choreographing the humans’ actions and emotions to cause as much chaos as possible. The mute character revels in amorous frenzy, whether it be love, lust or jealousy, literally riding and pulling on the others or making them totter with inebriated infatuation.

Guth is helped by a cast of fine singer/actors who perform the melodies gloriously under Johannes Debus‘s warm and expert conducting. Braun’s Count, regularly wiping away his nervous sweat, is caught between lechery and guilt, while Archibald’s Susanna never quite reveals whether she’s interested in the Count’s seduction or merely playing along.

Fons makes a lanky, coltish Cherubino, happily caught physically between the Countess, Susanna and Barbarina. Wall’s creamy-voiced Countess is another plus, as is Wagner’s suspicious Figaro, here more like a secretary than a manservant.

There is some comedy here, involving Marcellina and her compatriot, Don Bartolo (Robert Pomakov), but the show’s few laughs only set off the starker scenes of brutality and violence.

This take on the opera won’t appeal to everyone, but Guth’s choices are largely considered and followed through. Love blinds everyone, someone says in the last act, and that blindness doesn’t necessarily lead to a happy ending.