Review: The Motherfucker With The Hat

THE MOTHERFUCKER WITH THE HAT by by Stephen Adly Guirgis (Bob Kills Theatre). At the Coal Mine Theatre (798 Danforth).. 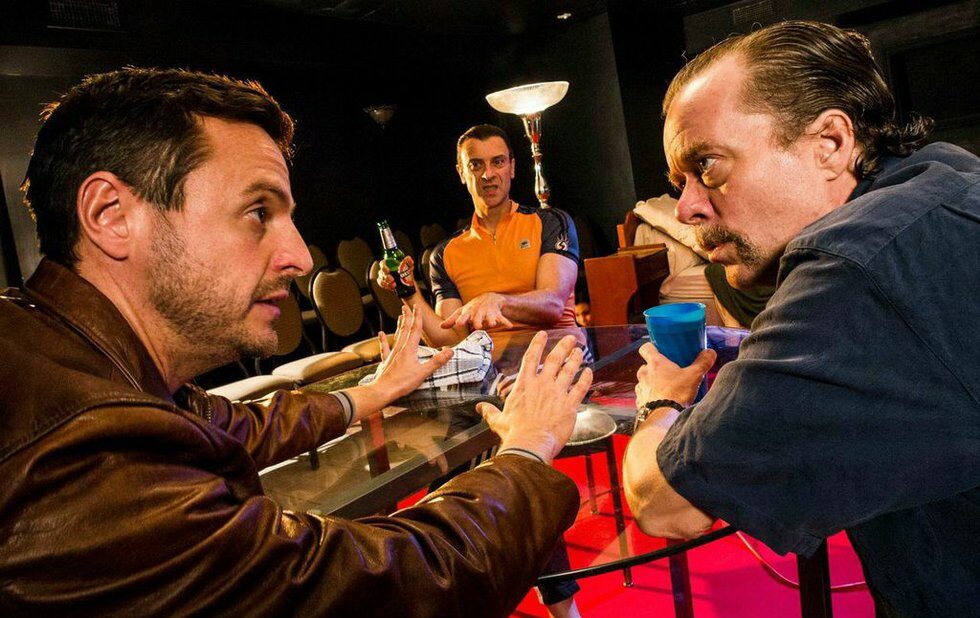 THE MOTHERFUCKER WITH THE HAT by by Stephen Adly Guirgis (Bob Kills Theatre). At the Coal Mine Theatre (798 Danforth). Runs to November 30, Tuesday-Sunday 7:30 pm. $30 advance, $25 door. brownpapertickets.com. Rating: NNNN

The language is coarse and the emotions large in The Motherfucker With The Hat, Bob Kills Theatres first-class production of Stephen Adly Guirgiss play about a couple whose high-passion desires first bring them together and then blow them apart.

Jackie (Sergio Di Zio) is recently out of jail and trying to stay away from drugs and booze Veronica (Melissa DAgostino) loves her vodka and coke. Alls great at the start of the show: Jackies just landed a job and wants to celebrate, but then he discovers a mans hat in his living room. He goes ballistic, especially when Veronica wont say outright that hes wrong.

Jackie turns to others to help him with his anguish. His AA sponsor, Ralph (Ted Dykstra), whos obsessed with health drinks, tries to get him to drop Veronica, given her nagging and addictions. Meanwhile, Ralph isnt having a smooth time with his own wife, Victoria (Nicole Stamp). Jackies cousin Julio (Juan Chioran) offers another sort of sober advice but will stand up for Jackie if thats what he needs.

Guirgis has an amazing way with language, capturing street talk with a rawness and immediacy that turn it into scabrous poetry, hysterically funny one minute and soul-scorching the next.

Director Layne Colemans exciting production, staged in the intimacy of the Coal Mine, has the plays language and emotions ricocheting off the walls almost immediately. Its as if were in the front row of a boxing match, watching the characters pound the shit out of each other. You cant help but be drawn into their passion and pain as they all try to make a place for themselves in a world that hasnt given them the best or happiest of opportunities.

Thats the thing about all these people: they might not make the wisest choices but they all feel so strongly, reveal their need with such heart, that we cant help but empathize with them. Theres an inescapable tenderness beneath the raunchiness of their words as they try to make their way through life.

The cast vibrates with energy, from the powerful connection between Di Zio and DAgostino just watch the shifting rhythms of their first scene, carefully orchestrated to the cold, barely concealed tension between Stamp and Dykstra. Lust is a pervasive perfume in this play, and it intoxicates the characters, who couple in different, shifting ways.

Chiorans Julio, the most sensible and self-aware of the five, is a delight, whether discussing hair care and waxing with Ralph or setting Jackie straight on why Julio takes care of him. And speaking of straight, Chioran gives a delicate swish to Julio without making him a gay stereotype. In a production filled with fine performances, his is arguably the most precisely drawn.