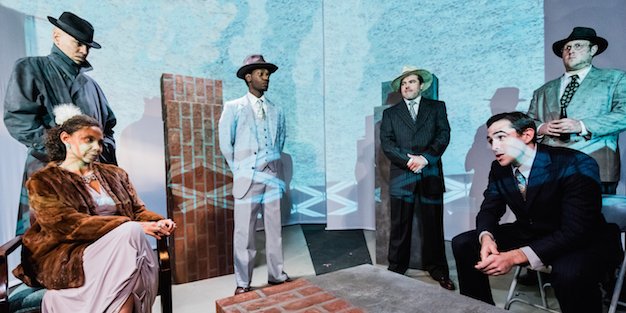 The Numbers Game looks at a little-known gangland war in 1930s New York, one seething with rivalries and racial tension. Just as striking, though, is the shows method of creation: six playwrights sat down in a TV-style writers room to develop its half dozen episodes.

Set just after prohibition was repealed, the storyline follows the confrontation between Queenie St. Clair (Karine Ricard), a Black woman from Martinique who runs a gambling racket in Harlem, and Dutch Schultz (Jamie Cavanagh), the white man who wants to horn in on her territory.

Its an exciting cat-and-mouse game, with the two central characters shifting back and forth between whos cat and whos mouse. Attended by various associates who are sometimes loyal, sometimes not, each tries to secure the financial and geographic territory and bust the other.

Director Benjamin Blais moves the action along briskly, especially in the first episode, written by James Schultz. On a simple, movable set designed by Christine Urquhart, with costumes by Holly Lloyd and lighting and projections by Melissa Joakim, the characters come and go with alacrity but still have a chance to establish clear personalities.

Though occasionally lines are mumbled rather than spoken, the company has strong chemistry, with the commanding Ricard and Cavanagh, whose dangerous Schultz is apt to fly into anger, upping the emotional ante when they finally meet. Their insults to each other, expressed as rumours, are daggers wrapped in smiles.

Several other actors stand out, among them Ngabo Nabea as a Black man who dislikes whites and allies himself with the lesbian Queenie Brandon Coffey, Jeff Hanson and James McDougall as Schultzs minions and, in a guest role, Beau Dixon (also one of the writers) as a musician and later a minister who sides with Queenie.

The second episode, by Claire Burns, slows the frantic pace a bit but still has its moments of humour and drama. Both it and the first end on effective cliffhangers, seducing us to return to see what happens in this historic turf war.

You can catch two episodes a night, the first a remount of the previous weeks show.