NOW MagazineCultureTheatre>>> Review: The Pitchfork Disney lives up to its cult classic status

>>> Review: The Pitchfork Disney lives up to its cult classic status

THE PITCHFORK DISNEY by Philip Ridley (Precisely Peter). At Double Double Land (209 August, down alley). Runs to May 22.. 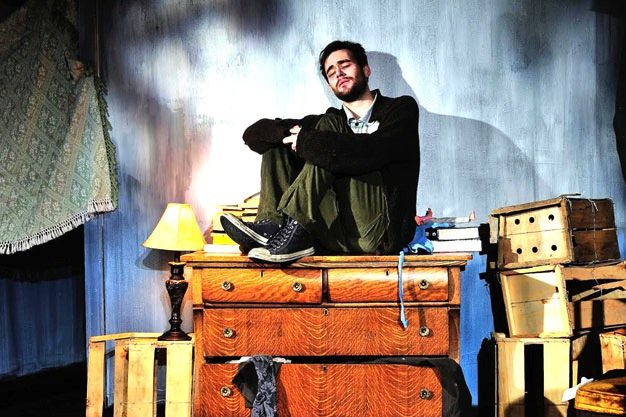 Justin Miller welcomes you to his nightmare in The Pitchfork Disney.

Tickets to The Pitchfork Disney should come with a warning: may cause nightmares.

Brit playwright Philip Ridley‘s 25-year-old cult classic still packs a punch, especially in John Shooter and Precisely Peter‘s visceral, spine-tingling production at Double Double Land, which you reach through an alley and up a narrow staircase in Kensington Market.

Twenty-something siblings Presley (Justin Miller) and Haley Stray (Nikki Duval) are living in a hovel, existing on chocolate bars, taking some unknown medication and telling each other stories about their deepest anxieties.

It’s unclear how they’ve ended up here. Where are their parents? Is there, as Presley tells Haley as he peeks out their window, a post-apocalyptic landscape outside?

Things get stranger when Presley brings in a visitor, the flashy, vain survivor Cosmo Disney (Ayinde Blake), whose job sounds like something from the TV show Fear Factor. Then comes Cosmo’s companion, Pitchfork Cavalier (Yehuda Fisher), a completely leather-clad, mostly silent creature out of a Clive Barker horror.

Ridley’s script alludes to all sorts of societal fears, from nuclear annihilation and serial killing to xenophobia. Shooter’s absorbing production suggests all these things without being reductive. George Quan‘s lighting and Thomas Ryder Payne‘s sound design successfully mix up the moods and rhythms in a two-hour show that seldom lags.

And the young performers are riveting. Blake’s charismatic, sexually ambiguous Cosmo is electric and sinister, while Duval and Miller make their guilt-ridden siblings fascinating as they frantically and fatefully plunge us deeper and deeper into their personal visions of hell.