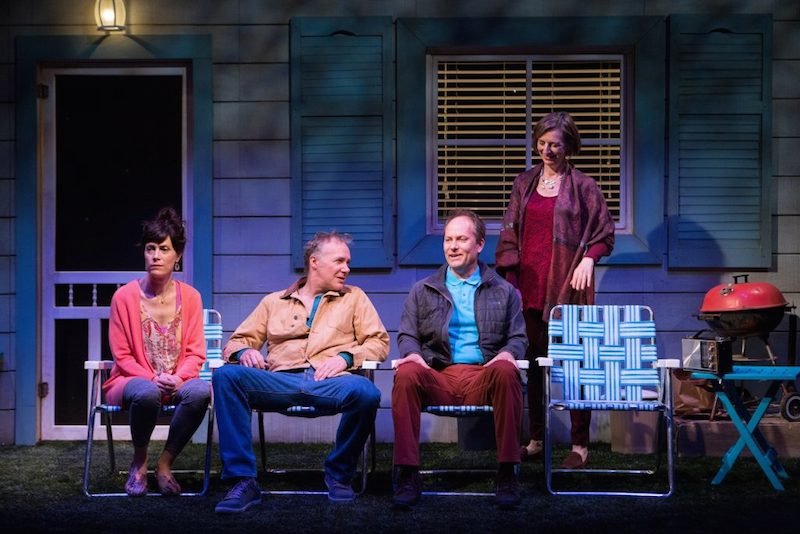 Will Enos long, pensive look behind the white picket fences of present-day suburban America is full of awkwardness and loneliness, but thanks to a strong cast, it still feels uplifting.

The play, which premiered on Broadway in 2014, opens with 50-somethings Jennifer (Susan Coyne) and Bob (Tom Barnett) Jones, a couple who dont have much to say to each other anymore, struggling to make after-dinner small talk in their quaint Anytown, USA, backyard. Their laboured conversation is interrupted by the arrival of their more outgoing new neighbours, Pony (Jenny Young) and John (Patrick McManus), who happen to share their last name. The weird odd couples relationship that develops between the four Joneses a fluctuating mix of tension and tenderness exposes the foibles, insecurities and personal failures of each of these seemingly normal characters.

The rather dark subject matter a subplot involves bad health news is kept in check by Enos consistently funny dialogue, which traffics in bizarre non sequiturs and awkward silences. John, McManuss blue-collar repairman, is the epicentre for this constantly dropping cringe-worthy anti-jokes, he becomes the shows standout character.

Despite Enos exaggeration of graceless interpersonal communication, there is, as the title suggests, a strong commitment to realism here that director Richard Rose and set designer Charlotte Dean convey nicely. Utilizing a very cool-looking rotating stage set-up, Dean presents alternating views of Jennifer and Bobs backyard and Pony and Johns kitchen. Occasionally the sets rotation is stopped halfway at 90 degrees, and the divider between the two main sets becomes a supermarket aisle or a back alley.

The cast manage the intentionally clunky dialogue well, drawing laughs but also hammering home the sobering poignancy and glimmers of hope that this bleak view of the American Dream offers.