Review: The Sound Of Cracking Bones 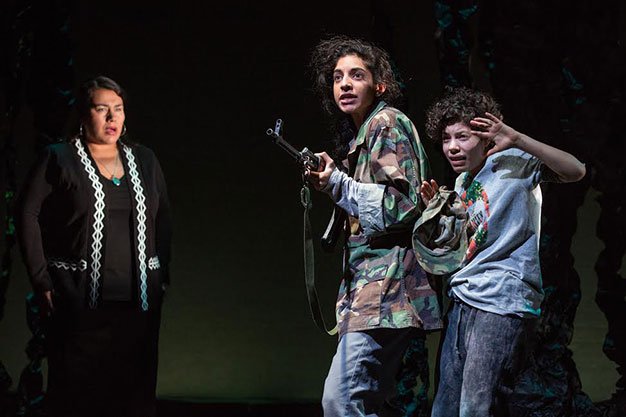 The Sound Of Cracking Bones deals with horrific material, but its a story that we must hear even if not all the plays elements succeed.

At its centre is Elikia (Harveen Sandhu), abducted by rebels at the age of 10 and now, three years later, a child soldier in an intentionally unspecified country. Her humanity, both toward herself and others, has largely been eliminated in a family where she is both an aggressor and a victim. Despite her age, as a female shes not only expected to fight and kill but also cook, wash and perform sexually for the groups men.

Suzanne Lebeaus script, translated by Julia Duchesne and director John Van Burek, captures the dreadfulness of Elikias situation but also, in a number of ways, offers a glimmer of hope.

At the start of the play Elikia meets a new captive, eight-year-old Joseph (Caity Quinn), who so affects her that she flees with him, knowing that capture and death are likely. Joseph becomes a surrogate brother we learn more about her own brother over the course of the show and someone who helps restore Elikias compassion. They set out on a fearful journey to find Josephs village and, they hope, freedom.

The third character adds another hint of light. Angelina (Patricia Cano) is a nurse at the childrens hospital that takes in the two children. Her scenes take place at a later time than the storys main narrative, as she presents sections of Elikias journal to a group of influential people who can make a difference in the lives of child soldiers. By extension, the audience becomes that group.

Given the material, the shows tension is often high, and Van Bureks direction highlights the contrast between the childrens desperation in the forest, where danger is everywhere, and the calmness of Angelinas testimony.

There are some fine scenes, including Elikias being taken by the rebels, her nightmare of giving birth to girls with guns and Angelinas growing indignation and steeliness when her words or rather the words from Elikias journal arent taken seriously by the committee she addresses.

Canos performance, simple and direct, both moves the action along and provides commentary on the narrative. This is a country, we learn from her, that has more guns than shoes.

Quinn is only partly successful in bringing the young Joseph to life. The character is often flat and requires further exploration we need a sense of what it is in Joseph that touches something in Elikia and sets them off on an almost impossible trek.

Sandhu is an expressive Elikia, first showing anger and fear as the soldier whos deserted a post for which she has no love, and then, in the course of the play, becoming softer and gentler as she discovers a new way of living and caring for others.

In the show’s last few minutes, the years of brutality drop away from Elikia she becomes a feeling young woman, in contrast to the character we met at the start. A quietness surrounds Sandhu here, a silence that contains one of the evenings most eloquent moments.

Adding to the productions strength are Teresa Przybylskis sets and Jason Hands lighting, complemented by the sound design of Debashis Sinha. The landscape through which Elikia and Joseph wander is a pair of rotating dark treelike creations their trunks and branches suggest black smoke or ashen sculptures, the charred remains of a lost youth.