THE STRONGER VARIATIONS adapted by the company, directed by Allyson McMackon (Rusticle). At Buddies In Bad Times (12 Alexander). To. 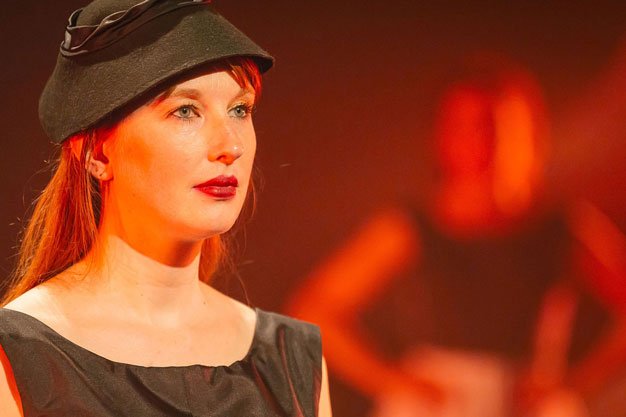 Allyson McMackon‘s intriguing adaptation and expansion of August Strindberg‘s 10-minute experimental monologue keeps getting stronger with each iteration. Initially a hit at the 2005 Fringe, the show was rejigged and revived in 2006 and again last year by McMackon’s students at York University. This new production has grown yet again, adding two new faces (Chala Hunter and Andrya Duff) to the original cast (Liza Balkan, Viv Moore and Lucy Rupert).

The show reinterprets and extends Strindberg’s 1889 original, a short chance encounter between a woman and her husband’s mistress in a cafe on Christmas eve. The dialogue is completely one-sided, the wife delivering an epic guilt trip to the mistress, who remains silent throughout. But instead of a quick once-through, McMackon provides a series of creative repetitions – the titular “variations” – stitched together with transitions featuring Rusticle’s signature physical theatre group movements. The dreamlike result more resembles Samuel Beckett’s recursive take on infidelity, Play – tortured souls condemned to relive fallout from an affair – than anything classically Strindberg.

Stylistically, McMackon’s version updates the action to a Normal Rockwell-esque 1950s Christmas, and the various interpretations of Strindberg’s scene range from realistic to abstract, from dramatic to comedic to almost entirely movement-based (including an impressive extended fight scene choreographed by Simon Fon).

Limited to the same block of text, the cast create a diverse set of renderings: one teases out coy passive aggression, while another goes straight for the jugular. Each interpretation reveals a different interface of strengths and vulnerabilities between the two characters – some very funny, others absolutely heartbreaking. The result is like a collection of very close readings brought to life, and demonstrates the diversity of possibilities in any text.

After watching the same scene repeated so many times, you’ll likely leave with entire passages memorized and bouncing around your head – not a bad thing since this haunting meditation on gender, monogamy and power inspires extended contemplation.