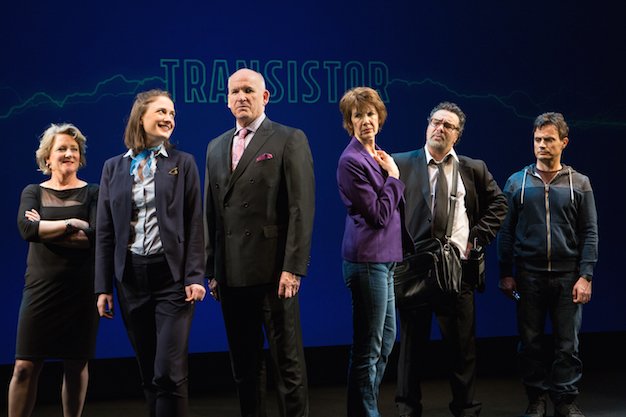 Fabrizio Filippos The Summoned downloads a tantalizing mystery, a bit of futuristic sci-fi, a look at personal-computer history and some striking characters.

The Tarragon premiere, directed by Richard Rose, features the playwright as Aldous, a naive young man working for his mother, Annie (Maggie Huculak), who runs a seedy airport hotel in which Khan, a tech magnate, hosts celebrity guests who appreciate their privacy.

Following Khans death, the hotel is the site of the reading of his will. Invited are Gary (John Bourgeois), president of Khans company and a genius at handling infrastructure, Laura (Kelli Fox), the companys hotshot lawyer, and surprise guest Isla (Rachel Cairns), Aldouss sort-of girlfriend.

Issuing instructions to everyone present, based on odd walkie-talkie commands from an unidentified voice, is Quentin (Tony Nappo), who presents himself as a security agent. When hes not giving orders, Quentin spends his time using and then ripping up burner cell phones and spraying air freshener around the guests.

Aldous is our host, taking centre stage at the start of the show as if he were a motivational speaker pumping us up for whats to follow. In the storys flashbacks, Filippo also plays a young Khan, with Cairns standing in for the youthful Annie.

Filippos witty script is full of comic moments, though serious issues rumble beneath the laughs, especially the question of whether love and loyalty are more important than creating a product and making money — a great deal of money.

The sharp cast captures the characters lighter side and the edge in their relationships: Bourgeoiss blustery CEO, Foxs seductive lawyer, Huculaks guarded mother and Nappos security guy, who knows more about this meeting than he admits.

Cairns, new to Toronto, makes an engagingly lippy Isla youd want her on your side in a scrappy situation. Theres also the walkie-talkie voice, supplied by Alon Nashman, who becomes a force more potent than you first expect.

But its Filippo who anchors the play, alternating charm and shyness in a performance thats appealing and at times, especially toward the end, scarily charismatic. Through Aldous, we witness the creation of several myths about Khans empire and realize that its possible for truths to be both funny and upsetting.

The staging and design nicely capture the plays focus on technology. Rose often has his actors stand or sit in a straight line usually a no-no in directing terms but that echoes the two-dimensionality of a computer screen, which frames the action in Jason Hands design. Occasionally a character steps out of that screen to highlight the difference between the visually flat computer world and the three-dimensional world that includes the audience.

Hands lighting also helps moves us between worlds, and, complemented by Kurt Firlas fine video watch for visual proof of Annies statement that the internet is the best thing that ever happened to the exclamation point and Dylan Greens sound, give a patina to the technology thats central to the narrative.

Early in The Summoned, someone asks the tantalizing question, how far from our nature will tech take us? Depending on how you read the ending, the answer is either pretty far indeed or not even around the block.