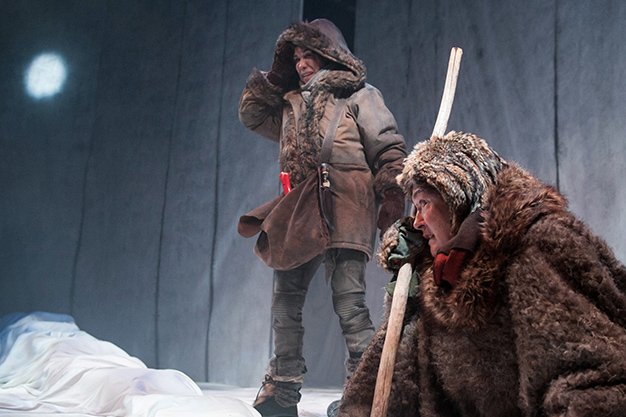 Diana Belshaw (left) and Allegra Fulton play women banished from their village in The Unplugging.

Diana Belshaw (left) and Allegra Fulton play women banished from their village in The Unplugging.

The Unplugging, Yvette Nolan‘s play about two native women trying to survive an ecological apocalypse, is a canny depiction of the ways dependencies change in the face of danger, playing to the strengths of the Native Earth company

Bern (Allegra Fulton) and Elena (Diana Belshaw) have been banished from their village, considered too old and decrepit to be useful to its survival. At first, it’s Bern who’s the more intrepid and hopeful, encouraging her obviously depleted friend to find a way to stay alive.

When they find shelter, the relationship shifts. It turns out Elena can hunt and shoot and knows how to tap into nature for food. It’s Bern who becomes despondent, until a young man from the village (Umed Amin) appears and gets her juices flowing. But he has another mission, too.

Nolan’s script is laced with sardonic one-liners and ironic themes. Female elders useless? Obviously, the villagers have lost their way, privileging technology over tradition, which works for them until everything crashes – hence the title.

But the play doesn’t do justice to its ideas. The actors may be white women playing natives, but they’re not the problem. Fulton is riveting, full of sexual longing and flipping from optimism to despair in a heartbeat. Belshaw’s Elena, the grieving mother who rediscovers her survivor mojo, has a gritty energy. As Seamus, the interloper with a mysterious agenda, newcomer Amin makes an impressive debut while not quite keeping up with the female vets.

But the play fails to create enough tension or distress. We should be worrying about what Seamus is up to, but that anxiety never materializes.

Designer Camellia Koo hasn’t solved the problem of the Factory’s wide stage, cloaking it in just a honkin’ swath of blue. That may stand in for the stark terrain, but it’s not much to look at. The evocation of the passing moons, on the other hand is effective, and Romeo Candido‘s soundscape is hauntingly beautiful.

Flaws and all, the piece, with timely ideas, tons of atmosphere and Fulton’s knockout performance, demonstrates how essential Native Earth is to Toronto’s stage scene.