THREE MEN IN A BOAT by. 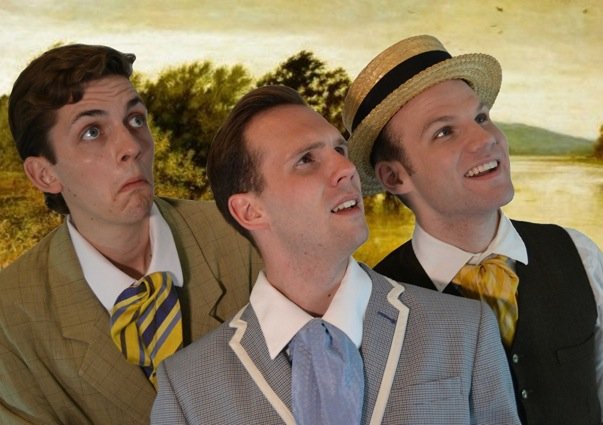 The combination of charm and perfectly pitched performances makes Three Men In A Boat a winner.

Those titular three are a trio of young, self-impressed Victorians who take a camping expedition up the Thames today we’d think of them as privileged slackers forced to invent activities to fill their time and their lives. Oh, and there’s a fourth member of their group: Montmorency, a dog whose silence adds to the tale’s humour.

Pea Green’s Mark Brownell has adapted Jerome K. Jerome’s hugely successful 1889 comic adventure, whose strength comes not so much from what the travelers do but from how they argue over the trip’s arrangements and react to the circumstances that befall them.

The characters are occasionally presented tongue in cheek but more often we see them frisking joyfully in their adventures, which include pre-river preparations as well as what happens to them on the river.

There are some standout scenes – navigating the maze at Hampton Court, the attempt to open a tin of pineapple – but the whole production is a delight, especially if you’ve had your own problems on a camping trip that didn’t quite work as you’d expected.