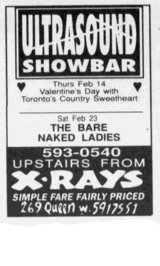 Married couple Miranda (Elizabeth Morris), a budding actor, and Alphonse (Chris Dodd), an accountant, are very much in love. At the start of Ultrasound, their focus is a discussion about having a child.

At the same time, Adam Pottles layered script explores deaf culture. Alphonse is deaf and communicates by signing, while Miranda, whos losing her hearing, can speak and, with some stumbling, sign to her husband.

At the core of the discussion is Mirandas hope for a baby she can love, while Alphonse wants a deaf child he pushes his wife to have a prenatal genetic test to confirm that fact. Alphonse is more and more adamant as the story progresses, and his insistence on continuing his cultural bloodline and nurturing a deaf infant drives a wedge into their relationship.

Part of his motivation is his own troubled history, but the unseen figure of Nick, a deaf-rights activist friend, also influences his decision.

Pottles story, a domestic drama, plays out under Marjorie Chans sensitive direction with a few twists, some narrative and others involving the production.

Heres a rare opportunity and I hope its not the last one for Toronto audiences, both hearing and deaf, to see a play by a deaf playwright with deaf actors, dealing with concerns that probably dont occur to many of us.

The result is a production communicated in three ways: speech, American Sign Language and surtitles. Initially its rhythms might seem slow, but the engaging performances and building tension draw us in.

Morriss warm and open Miranda is convincing in her desire to continue a stage career she thinks might be too demanding. A metalhead like her friend, Carol (who, like Nick, we never meet), Miranda uses the head-banging music to let off steam.

But its Dodds Alphonse who makes the most powerful impression, beginning with his eloquent signing of a Shakespeare sonnet for his wifes birthday (shes auditioning for the role of Miranda in The Tempest) and continuing with several soliloquies explaining his history and reasons for wanting a deaf child. You can read the increasing anger in his body as well as on his face.

The production design set, lighting and surtitles by Trevor Schwellnus, projections by Cameron Davis and costumes by Nina Okens enhances the couples world, while Richard Lees sound conjures up the growing tempest between the pair, its rumblings shaking the audience physically as well as aurally.

The script could be fine-tuned more could be made of The Tempests brave new world image, for instance, and Mirandas inner life could be explored further but Ultrasound makes a significant statement, in several ways, about artistic inclusivity.