NOW MagazineCultureTheatreReview: Vanya and Sonia and Masha and Spike

Review: Vanya and Sonia and Masha and Spike

Vanya And Sonia And Masha And Spike by Christopher Durang (Mirvish). At Panasonic Theatre (651 Yonge). Runs to April 5,. 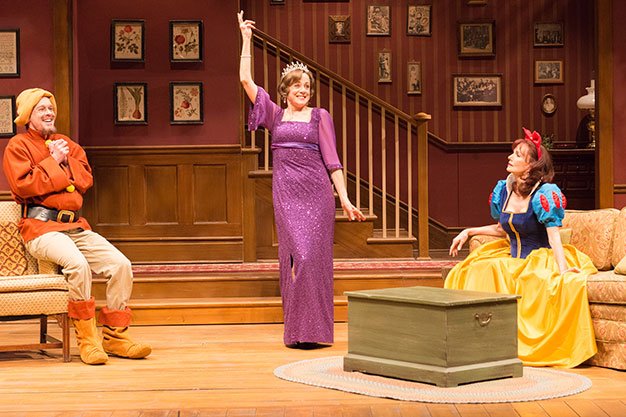 Fiona Reid is so terrific in Christopher Durang’s Vanya And Sonia And Masha And Spike, you almost don’t notice that the play itself is far from first-rate.

As Sonia, perpetually ignored and lamenting a life lived small, Reid gives a comedy clinic, expertly demonstrating how a character can evoke pathos and get laughs at the same time.

Sonia and her brother Vanya (Steven Sutcliffe) live in the rambling farmhouse in rural Pennsylvania where they grew up they haven’t done much since except nurse their parents for 15 years until their deaths. Their sister Masha (Jennifer Dale) has been busy with her five failed marriages and the B-movie career that’s paid for her parents’ care and her siblings’ living expenses.

When Masha arrives with her studmuffin, Spike (Luke Humphrey), the family dynamics reveal Sonia as spectacularly resentful, Vanya as a pathetic milquetoast and Masha as infuriatingly self-centred. The trio’s decision to attend a neighbour’s costume party could, however, change everything.

Lower your expectations for the piece itself, an unworthy winner of a Tony Award for best play. Only the middle-aged Vanya and Sonia are written with any depth. And even so, Vanya’s near 15-minute second act monologue, central to Durang’s critique of alienating social change and another obvious sop to his boomer target market, is pages too long.

Boy toy Spike is a stock character, and so is Masha, who’s a one-note wonder until her sudden, incongruous change of key at the end.

You could argue that you can’t expect much more from a comedy, but these characters are named after Chekhov’s for a reason: they ache with regrets and longing. Though Durang, with his clever theatrical references and inside jokes actively lowers the tone, there’s more here than just silliness.

Reid grasps that. You can tell by her anxious tone and the wistfulness in her gaze. Her posture is stooped, and she’s so clumsy she can barely get herself into a chair, so when she experiences emotional changes, they’re reflected in her gestures and the way her body comes to life.

And she’s funny as hell, especially in the Maggie Smith imitation that becomes central to her personal transformation.

The rest of the cast doesn’t fare quite as well. Sutcliffe is endearing as the possibly gay Vanya, but Dale’s way over the top – not that her role allows for more than that. Humphrey as her boyfriend brings nothing new to the table. If you’ve seen Tim Robbins’s dumb jock in Bull Durham, you’ve seen this performance.

And director Dean Paul Gibson makes a huge mistake by not reining in Audrey Dwyer as Cassandra. Bug-eyed and overbearing, she plays the role of the all-knowing seer as if she’s in a sitcom when the role actually requires a dose of tragic melancholy.

Durang’s written in a character that’s ripped right out of The Seagull. Nina (properly fresh-faced and energetic Ellen Denny) is an aspiring actor who gets to read Vanya’s experimental play, which he says is inspired by the one written by The Seagull’s Constantine. There are myriad mentions of the cherry orchard near the pond outside, and other Chekhov references.

But you don’t have to know that playwright’s classics to enjoy this show. Just sit back and watch Reid in action. You won’t see many performances as good as this in your lifetime.