Review: Old Man and the River 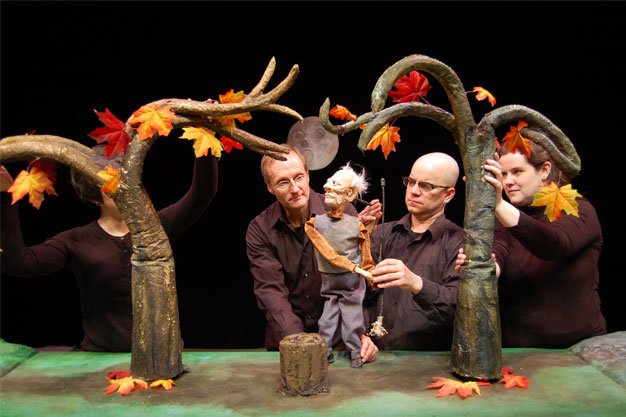 The expressive Old Man And The River is a must-see for the wee ones.

The ability to hold an audience aged three to six for a whole play – even if it’s only 30 minutes long – is awesome.

That’s just what Old Man And The River does, without any need for parents to shush their offspring.

Created by director Lynda Hill and Thomas Morgan Jones from a story by Jones, the tabletop puppetry show follows a grumpy and lonely Old Man whose only pleasure seems to be fishing every day in the river near his isolated cabin. He ignores those who want to be his friends, including some playful trees and fallen leaves and a curious dragonfly.

A literally sparkling river fairy, effervescent and lighthearted, does its best to connect with the man and initially can’t. But warmth wins the day, and the lights go down on a much more contented Old Man, who says good night to the moon he’s previously grumbled at and goes to bed with an unusual teddy bear.

Originally presented last May at Theatre Direct‘s WeeFestival of Theatre and Culture for Early Years, the largely wordless show is a gentle yet powerful example of how theatre can entrance and entertain.

Puppeteer/designers Eric Woolfe (miles away from the kind of work he devises for his dark Eldritch Theatre shows) and Mike Petersen, assisted by Kira Hall and Seanna Kennedy, manipulate and voice all the characters, and they’re as charming as the laughing trees and the teasing fairy who follows the cantankerous Old Man home. You can watch the puppeteers’ expressive faces and fully understand the emotions that inhabit the characters.

Nicky Phillips‘s score has its own simple allure, as does Kelly Wolf‘s design, which shows the house, trees and river but also what lies beneath them.

In her pre-show and post-show talks, Hill invites her young audiences into the world of the show, first coaxing them to demonstrate their own feelings through body and face movements and later revealing some of the methods used to make the puppets.

Want to introduce your preschool kids to the magical world of theatre? I can’t think of a better way than Old Man And The River.