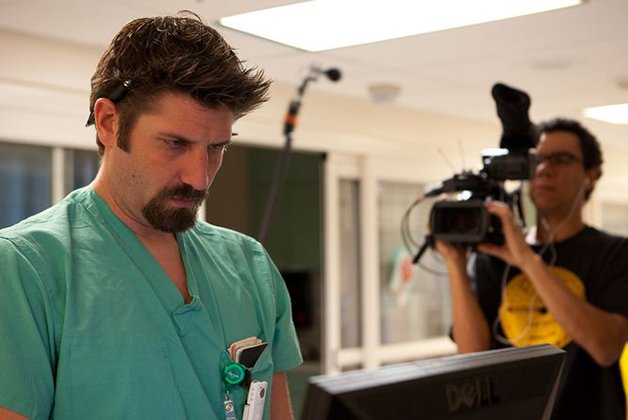 The first of the two related stories involves Chrissie (Michelle Monteith) and Jeremy (Jordan Pettle), a young couple whose infant daughter has a brain tumour. The second concerns their doctor, Andre (Ari Cohen), and his assistant, Melissa (Jenny Young), who conduct some unorthodox experiments dealing with early-onset Alzheimers.

Flacks and director Richard Greenblatt weave the tales together skilfully, with the cold Andre, a hotshot physician with no bedside manner, insisting on aggressive therapy for the infant after the tumours removal. Importantly, the play relies on moments of dark humour to alleviate the intensity of Jeremy and Chrissies situation. Much of that caustic wit comes from the mouthy, uncensored, big-hearted Brenda (Jane Spidell), an older woman who, with her teenage son, has gone through much of what the couple now face.

Though there are some strong moments in the world of Andre and Melissa including his going head to head with the sympathetic department head (Warona Setshwaelo) theirs is the dramatically weaker of the narratives.

The more memorable Chrissie/Jeremy plot, which follows the arc of their relationship, how they fight and comfort each other while facing their daughters illness, is well captured by the actors.

Monteith, as always, is totally honest and touching as the concerned mother whose anger, fear and sadness are palpable watch her beautifully timed reaction to the suggestion of palliative care. Chrissie needs someone to share the horror shes going through, and since Pettles gotta-keep-busy husband cant do that for her, she turns to Brenda.

But we come to see that even this match isnt a perfect one in a fine scene that captures the comedy, tragedy and coping mechanisms shared by these two women who realize, rather shockingly, the nature of their friendship.

Cohens Andre becomes more sympathetic to the audience over the course of the show, though the character is the hardest to care about. Dubbed Doctor 45 Seconds for the amount of time he spends with distraught families, Andre quotes Kafka to reassure them that things are okay.

As the researcher who wants more in her work life than test tubes, Young portrays a character whose heart and professional instincts are at odds with each other.

The questions that Flacks raises, about the doctor/patient relationship, the physician as a godlike figure and the decision to experiment for the good of science rather than that of the patient, are carefully posed and left for us to ponder.

Adding to the shows strength are Cameron Daviss projections, a precis of whats going on inside peoples minds and bodies, and Reza Jacobs sound design, which captures the monotony of life in the waiting room and the fearsome moments when something the wrong something happens.